When Michaela Waddington found her two-year-old Arab, Diesel, tangled in an electric fence wire she feared the worse. A call to get out the vet and months of treatment followed...

Diesel, a pure-bred Arab, was a two-year-old when it happened, he's now three. We think another horse ran him into the fence and while trying to escape he got tangled in the electric fence and ripped a deep hole in his hock and had further lacerations to his legs. 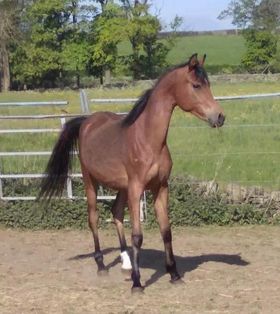 "in the first few weeks, he had three visits from the vet to treat the wounds, a trip to the equine hospital and another two vet visits, the last one being four months since the injury!"

The accident happened in March 2021, in the first few weeks he had three visits from the vet to treat the wounds, a trip to the equine hospital and another two vet visits, the last one being four months since the injury! Thankfully there has been no damage to the joint itself, it's a purely cosmetic injury which I was relieved to hear with him being so young. It's taken four months for the swelling to go down and he has been left with lots of scars from the multiple lacerations but all is ok otherwise and he is sound.

A relief to have Harry Hall Vet Fees Insurance:

I took out the Harry Hall Vet Fees insurance a few months prior to the accident and it was paid out in full with no queries, it was a very easy process. The vet bill was around £1,000 and they left the claim open as the vet said it may need further treatment but luckily it hasn't. Harry Hall was very helpful when I contacted them about making the claim and I would certainly recommend them based on my experience.

Diesel is back walking on the moors now and I hope to do long-distance rides with him in the future.

Previous Meet An Equine Nutritionist Next Ulcers In Horses
To Top