Keeping Up With The Cowgirls

So we all know a keen showjumper or dressage diva but how many of us know a secret cowgirl or have attempted barrel racing? We asked Danielle from A Cob That Can to give us the lowdownon how she got involved in the sport...

For years I have watched and photographed barrel racing admiring the speed and control wanting to give it a go. About six years ago I photographed a Western event near Newark and spent the whole day imagining myself sat in a western saddle and cowgirling up.
A couple of years later I had the chance to ride a quarter horse on a regular basis in a western saddle etc. The more I rode western the bigger the bug grew.  I was like a four year old with their first pony. I'd ride all evening and once we had finished, the barrel racing and western riding videos would be getting played to death. It's all I thought about and wanted to do.

Now fast forward a few years to having Aladdin and I was still longing to make that dream a reality and compete in barrel racing. He wasn't the most nimble typical barrel horse, in fact he was just a barrel but we were going to do it. We practised our walk to canter transitions, made sure I had full brakes just by shifting my bum and putting my feet forward and had him as voice activated as we could possibly get. Voice commands ended up being Aladdins strong point and as soon as I made the canter cue he would be off like a rocket even from stand still.

We rocked up to our first show fuelled on rescue remedy and killer butterflies. It was a 4 Strides clinic morning followed by an afternoon competing. We took in all the other riders in full Western attire whilst our Western efforts consisted of putting on our new paracord reins and my old faithful riding boots. It's safe to say our English saddle stuck out like a sore thumb and my pom-pom hat silk wasn't exactly your average cowboy hat.

The clinic was fabulous and so laid back, there were even kids on lead and other adults on cobs coming to try it out. To start with I just walked Aladdin around the barrels and jogged in-between whilst he took everything in. As the morning progressed so did the pace. We started loping home. It was the best feeling ever! Each run Aladdin notched the speed up until he started squealing at the final barrel before flying home. His squeal made me want to squeal, my guts did a front flip but so did my heart it was amazing.

The last couple of runs quite literally blew me away, the pom pom on my hat silk struggled to keep up as he whipped round the last barrel and galloped home.

Once back home I knew I was hooked, we were almost instantly booked in for the next show, I had cowboy jeans on order and lessons on some of the yards horses written in to my diary. Barrel racing is actually addictive, fact! 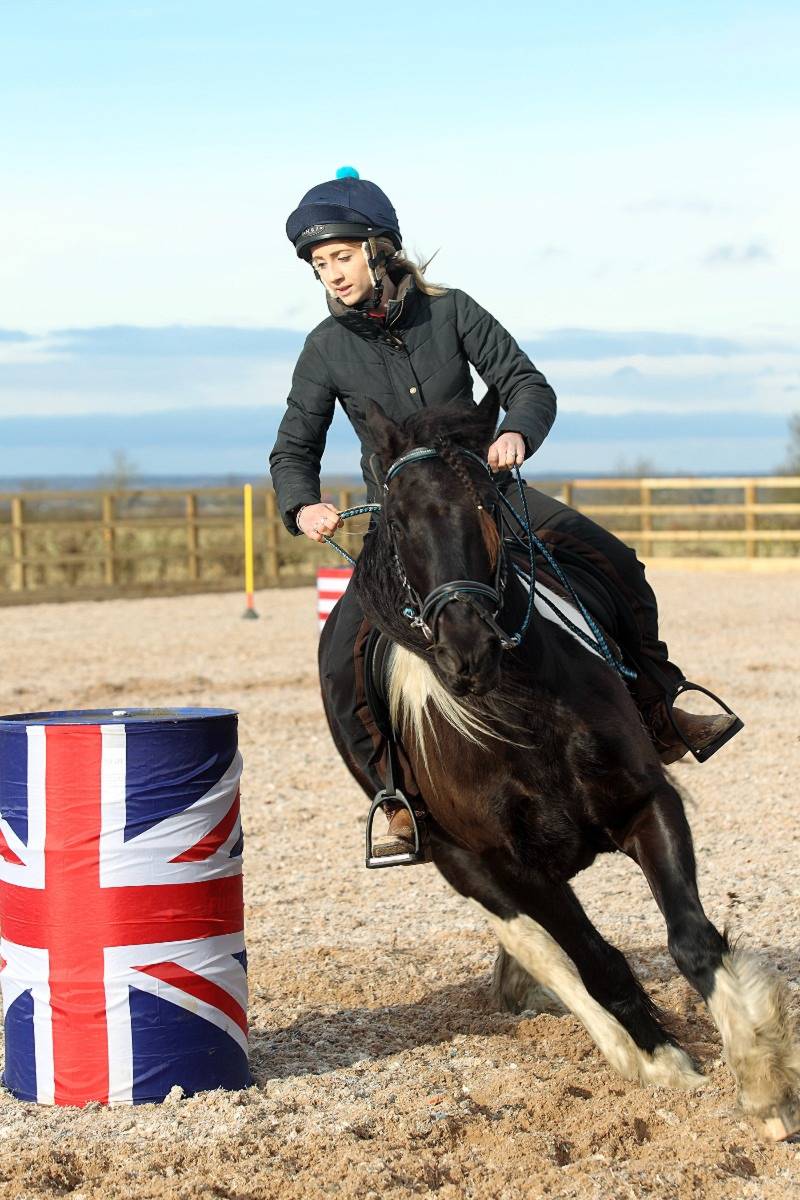 I would 100% recommend giving barrel racing a try to absolutely everyone. The atmosphere and people at the 4 Strides clinics was super friendly and encouraging, it worked wonders on our ever so slightly fragile confidence. Aladdins polework and flatwork even improved once we got back home. His canter felt more powerful and it certainly opened up more when I asked for it.

The super thing about the 4 Strides Equestrian events are that you can compete in any tack and on any horse/pony. I mean being able to race my cow against some of the horses and riders who are members of the UKBHA and compete abroad felt fairly dam fabulous.

Have you tried barrel racing, if so I'd love to hear from you below!