We drove back from Ben Atkinson’s yard like springtime swallows in a state of bemusement and admiration for the day we had just experienced. We started to ponder how on earth we could write about this completely mesmerising experience and how we should put into words what we had just witnessed. How can we sum up this incredible horseman?

If you’ve not heard of Ben Atkinson – where have you been? This Liberty Horse Trainer has made quite a name for himself, thanks to daredevil displays at equestrian events in the UK and training the likes of Aidan Turner (aka Poldark) to ride. His family’s horses have appeared in hundreds of TV shows and films all around the world. His social media following is a healthy six-figure number, and his string of horses have manes that wouldn’t look out of place in a Herbal Essences advert. For all this fame, the Atkinson yard is unassuming. It has been part of the family for three generations and is nestled away neatly at the end of a long, country track in East Yorkshire. A grumbling terrier greets us, accompanied by handsome horses peering over their stable doors as we wind our way through the numerous buildings and indoor barns trying to find Ben. Tina (known on the yard as ‘horse mum’) and Sam (her first day on the job doing yard duties) greet us warmly. First on the agenda is to watch Ben work his Liberty team, and from this moment on, we enter a parallel universe…..

Liberty is to work horses without straps or restraint

The mutual respect, trust, and unspoken communication between Ben and his team of four horses while they’re working together have us leaning on the fence speechless. Like you, we’ve witnessed displays like this at horse shows, twenty rows back on a small plastic seat, or on television and yes, we’ve been impressed by the horsemanship and stunts. But this was something different. The privilege we felt to be witnessing such harmony up close is indescribable. Only in this intimate setting do you appreciate how many years have gone into training horses to get to this level. As Ben and his Liberty team of four glide around the large, square arena as a united front, we realise that we are not watching a stunt man with his horses playing to a crowd - far from it.

We are watching mates playing, having fun, high on the energy of life, unaware of their difference in size and strength, simply loving what they do. The phrase ‘poetry in motion’ has never been more apt. It is bonkers, surreal, inspiring and beautiful all at the same time. Ben is in control, the horses are moving in different directions and at speeds that make you question everything you have ever learnt about working with horses. When asked how long Ben spends training his Liberty team daily, the answer surprises us. “Sometimes 20 minutes, sometimes two hours." The latter sends shivers down our legs as we think of the miles he must cover in the arena while teaching his team to read every single body movement, listen to every whistle and subtle command thrown their way.

Some are my friends, and some are colleagues, I have a different relationship with every single one of them but it doesn’t make them any less important in the team. 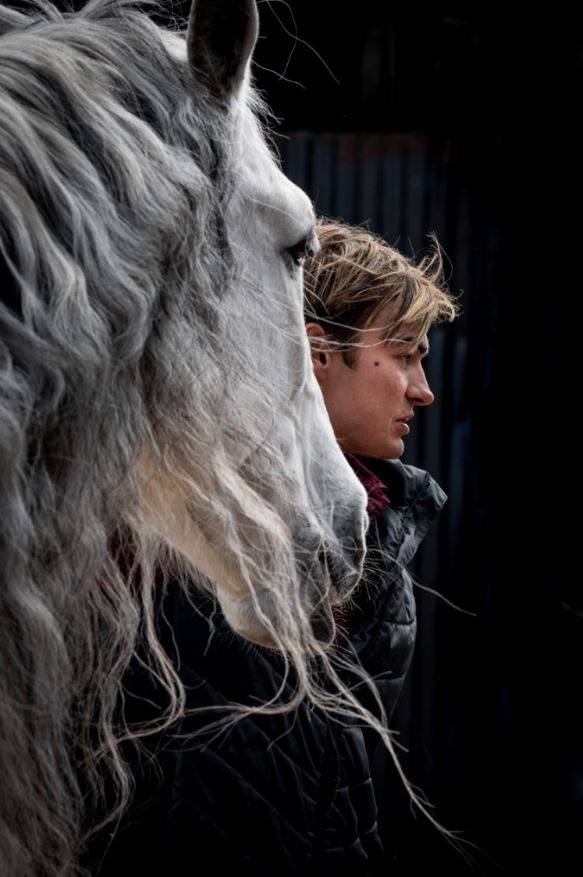 Our mind wanders to the number of calories Ben must burn in one training session. Burning calories isn’t new to Ben though. He can be found running in the morning before heading to the yard and weight training in the evening. Strength and fitness are crucial components of this gutsy rider’s routine. After all, you must be strong to balance on two horses while cantering around the arena at full tilt!

When we think it couldn’t get any more bonkers, Tina and Sam bring out three more horses. Ben is now working seven horses in the arena, and it turns out it’s not unusual for Ben to work 12 at home in one go. “The three we have just let in are crackers” laughs Ben. “They’re just crackers, it’s who they are, and I love it.” After some further digging, it turns out Ben knows all of his 42 horses intimately. “Some are my friends, and some are colleagues, I have a different relationship with every single one of them but it doesn’t make them any less important in the team.”

It’s not long until we find out what, or rather who inspired Ben to pursue this unconventional path. “Back in the day, my Grandad had horses to work the farm, they had to be trained to serve a purpose on the farm, and he found a way to teach every single one of them, including the ones who on paper, should never have been able to pull a cart. They had an important job to do and my Grandad worked hard to find the key to every horse so it had a role on the farm."

It's at this point that Ben reveals that he has dyslexia and that he sat confused at school for a long time before figuring out that there had to be a different way to learn. And with this came the realisation that achieving your goals takes time. This is something he reminds himself of every single day when training his horses. “Imagine the slowest, most boring way you can teach something, then slow it down some more, then a bit more – that’s how you teach it.” It turns out Ben is also a fan of the letter C when training his horses. Clarity – be clear in your goals for each horse and be clear in how you work towards them. Consistency – be consistent when asking for the same movement or behaviour, do not cut corners as you’ll have to keep going around them. And finally, Confidence – if things are clear and consistent, the confidence in your horse and your abilities will grow and ooze out of you.

We hear every word, clearly, and wonder how Ben speaks so wisely for his mere 27 years. “Your horse is your horse. Don’t see its flaws as problems, see them as things you can fix, make your goals as small as they need to be, then smaller again. Go with what you’re good at, play to their strengths and to your own strengths and find a way, in a positive and goal-driven environment. If something is worrying you, keeping you awake at night like an unpaid debt, change it, flip it, find another way.” Ben mentions Avalon, a horse he was given when he became too dangerous for his previous owner to ride. Ben continues: “So we just don’t ride him. He’s awesome as a Liberty horse and has performed in front of some huge crowds. Life as a riding horse wasn’t for him, he has a job here and he’s happy.” 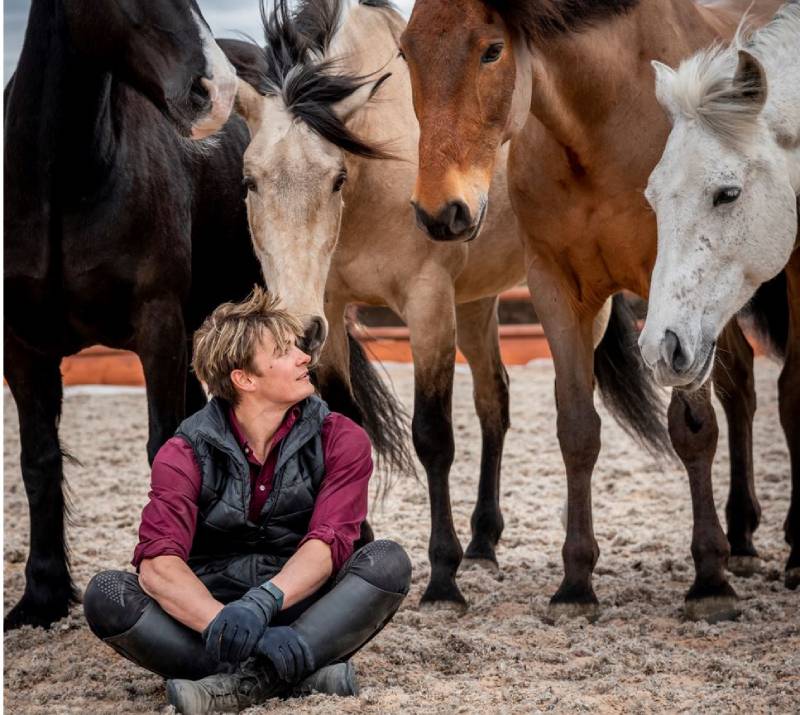 We moved out of the arena and gathered (socially distanced) around a straw bale in one of the barns. Flanked by horses of all shapes and sizes and with a cold wind whistling through the shed, Ben gets talking and it’s hard to stop him. His passion for the equestrian industry, for his horses, and for what he does, is infectious. 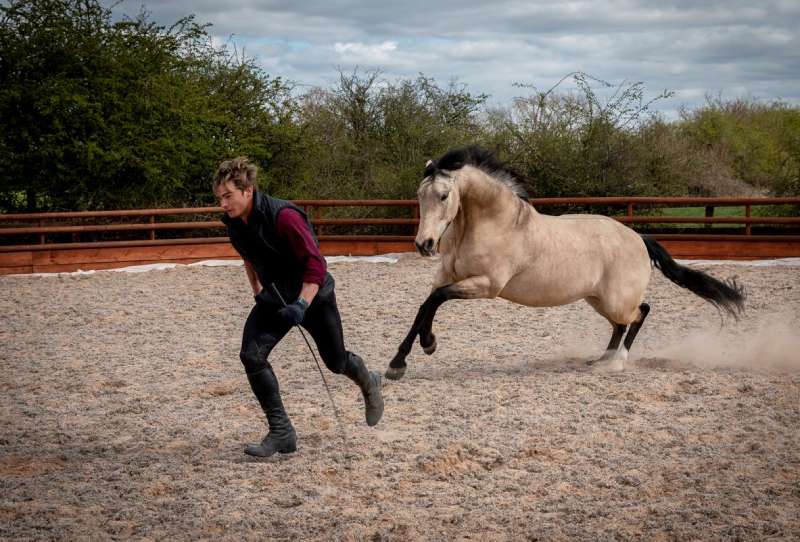 He talks about when he spent four months in India training polo horses for a Bollywood film, crouching in bushes just out of camera shot hoping the snake seen in the area a few hours before doesn’t rear its head. He mentions how the celebrities that he works with are totally down to earth, with a special mention to Jodie Kidd for being up for a laugh. And he speaks of his wishes for the equestrian world. For a world of positivity, encouraging one another, offering advice when it’s asked for and being realistic of our goals and dreams. And if you think you’re the only one who suffers from pre-competition nerves, think again. Before arena demos or big film moments, Ben gets nervous. But instead of letting the nerves cripple him, in true Ben style, he’s found a way to use them to make his performances better. “The day I stop being nervous is the day I stop doing what I do. Pressure is a privilege, and it helps me, and my horses perform. I worry about all sorts of things happening when we’re in the ring, but I know I’ve prepared as well as I can. Preparation is key. If I feel underprepared, I won’t perform.” At home, Ben trains a level above what he does in a demo: “in truth, my demos are only 80% of what my horses can do. I never want to put pressure on them in the big rings and I need to know they’re fully capable of everything I’m asking for.” Ben relates this to showjumping: “you wouldn’t jump a maximum of 80cm at home then enter a 1m class at a competition. You want to be jumping 1m at home and entering 80cm classes at competitions.” And if things do go wrong? “I laugh. You have to with horses as so much can go wrong and does go wrong!”.

Talking of when things go wrong, there was Rupert. As he grew longer in the tooth, he became prone to having wind, often at the most inconvenient time, mid-scene, on stage with actors. Then there was gazebo gate. Ben describes how on the edge of a Cornish cliff he watched a gazebo take flight and blow just a foot over Aidan Turner’s head as he sat on one of Ben's horses, obliviously eating his lunch in between scenes. This is where we learn of the beautiful innocence in the way Ben teaches actors to ride. “You bring actors up with horses like you bring children into the world. A world where you never encounter anything bad, there’s never any pain, and they learn to believe that nothing bad will ever happen on horseback.” In his training, if something goes wrong, Ben looks inwardly. “It’s the most relaxing feeling in the world when you’re working with horses and something keeps going wrong, but you know it’s you. I can fix myself, I can fix my performance and the way I ask for movements. Being brutally honest with yourself will help you achieve your goals.”

We arrive home with a heightened respect for Liberty training and a firm reminder that it takes time to train horses. We ponder how we can improve our training and set realistic goals. So join us in dreaming of what you can do together and leave behind what you can’t. Join us in finding our childhood innocence once again, let’s believe that nothing bad will happen and embrace the feeling of freedom this brings. And when it does go wrong, let’s laugh together as one joined-up community. And just in case you’re wondering, the horse Aidan was riding didn’t move an inch when the gazebo skimmed over their heads. Turns out Ben is pretty good at training his horses for absolutely every scenario.