Angus Corrie-Deane is 18, and a dressage rider with a bright future. A veteran of British pony teams and junior Nations Cup teams, his goals is to make the British Young Rider team in 2018. He recently won the small tour qualifier for his region - so off to nationals at Keysoe shortly.

This year he was given the opportunity to take the ride on the exciting 12-year-old 17.1hh Rhinelander Tiny Tempur, bred by Fiona Bigwood.

“He is fabulous, however has not been straightforward to keep condition on,” explains Angus’s mother Mary. “He is highly strung, a Ferrari but not hugely nervy. He is a big framed horse but clearly has a high metabolic rate and is just not a good doer. 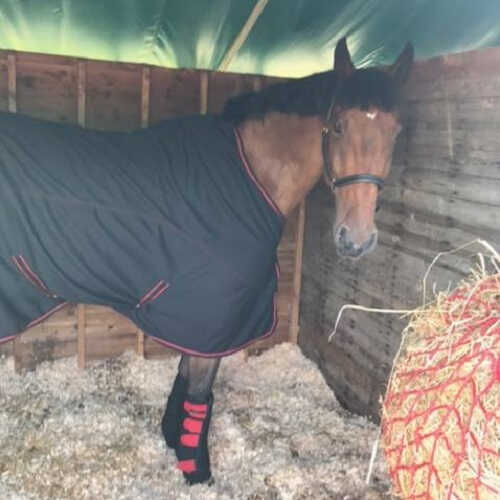 “We heard about Protechmasta — and how it harnesses the body’s infrared rays to improve temperature regulation, healing and relaxation etc —  and decided to look into it. I am a great believer in complimentary therapies — they do so often make a difference.

“We used the rug, the boots and the poll guard, and within about a week we already noticed a difference, especially in his coat. There was no change in food etc, but people were saying ‘Goodness! What have you done with him?’ Now, three months on, we are continuing to see improvements to body condition and coat shine “

Angus has Tiny and his other young horse, Jacob at home. He also has a couple of youngster,  bred by his family for him to produce from scratch in the future.

He trains with dressage legend Jennie Loriston-Clarke and Angus has also had input from Peter Storr who looks after the GB Pony Team.
Now, Angus has been invited on to the Excel Talent Programme on the equestrian talent pathway, where he will receive coaching  from another former British team veteran, Gareth Hughes.

Though young himself, Angus has begun teaching clinics.

“I Iove working with people who want to improve and find it quite easy to see simple things riders can do to make a big difference,” explains Angus. “But you need to convey that to a rider in a way that makes sense to them. And it makes me clarify for myself, in the process, those things that can make such a big difference to how a horse goes.”

Find out more about Angus at Angus Corrie-Deane Dressage on FB.