When you think of laminitis what do you see? A fat little pony that has overeaten on grass and grains? While that image does still hold true, ever-increasingly we are understanding the internal and systemic links that cause up to 90% of laminitis cases today.

So what is really going on? In a word; INSULIN. In a bigger word; HYPERINSULINEMIA. Hyperinsulinemia is when there is an excess level of insulin circulating in the blood relative to the level of glucose.  We now know that hyperinsulinemia is a direct trigger factor for Metabolic Laminitis.

And what causes this hyperinsulinemia? Primarily one of two hormonal diseases; Cushings disease (Pituitary Pars Intermedia Dysfunction, PPID) or Equine Metabolic Syndrome (EMS). Both of these conditions cause the horse to have abnormal control over its carbohydrate metabolism. In turn, this results in the horse having an abnormally high level of insulin circulating in its blood. 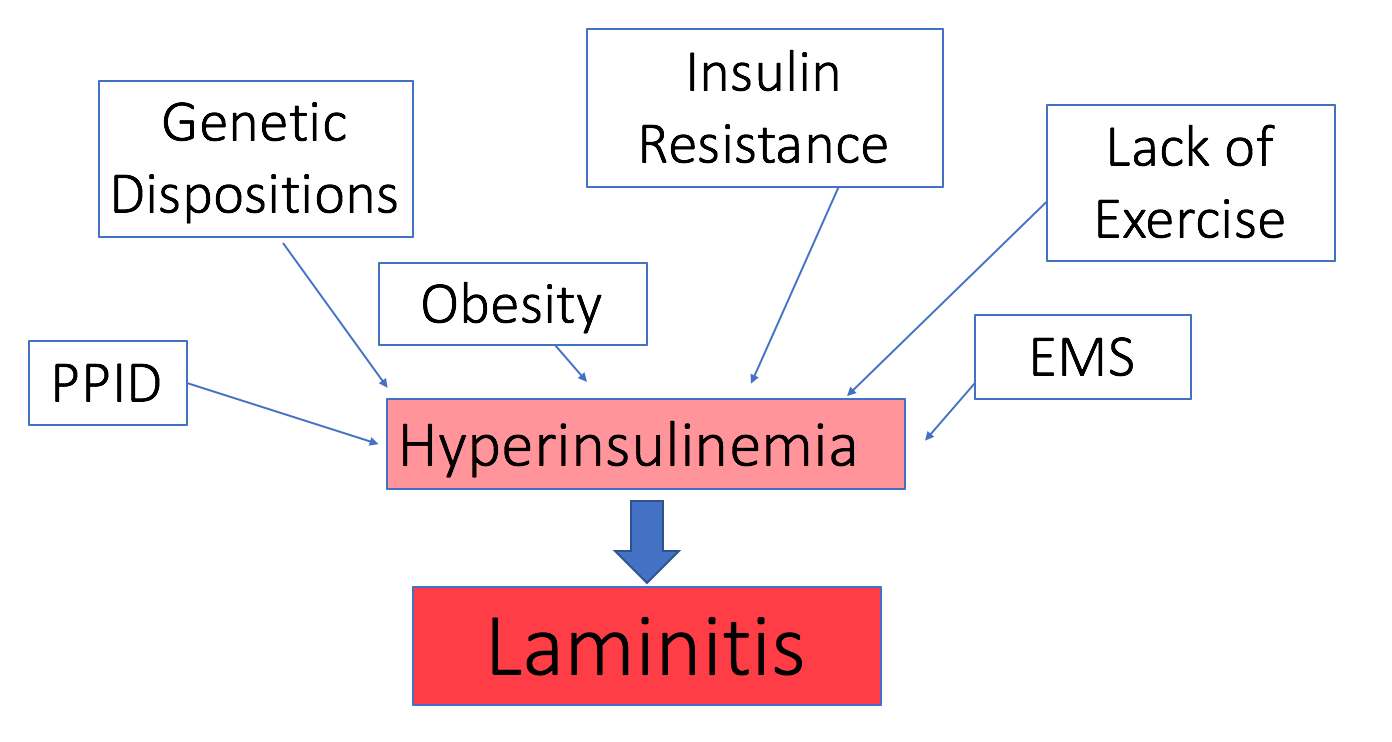 PPID is an ageing hormonal disease caused by changes in and loss of control of the pituitary gland.  Located at the base of the brain this gland is responsible for producing lots of important hormones. Horses with PPID lose control over this gland and end up producing too much of the hormone ACTH. By measuring the level of ACTH in a blood sample we can diagnose and monitor this disease.

Although the exact link between cushings and laminitis is still unknown we do know that insulin has a role to play. Horses with PPID produce too much insulin after they eat high sugar and starch feeds, and it is this hyperinsulinemia that is a trigger for laminitis.

Equine Metabolic Syndrome is a hormonal condition seen in overweight insulin-resistant horses.  Some horses, particularly native ponies, are genetically susceptible to developing EMS, and do so if an inappropriate diet and lack of exercise cause them to become obese.  When horses and ponies who have EMS consume large quantities of sugar or starch the result is higher levels of circulating insulin.  Again, it is this hyperinsulinemia has been shown to cause laminitis.

Whereas in the past the treatment for laminitis was in treating the inflammatory clinical signs, we now focus on treating the underlying systemic disease. By combatting the PPID or EMS we stand a much better chance are treating and preventing any future laminitic flare-ups.

Treatment is in the form of medication prescribed by your vet alongside essential husbandry changes.  Weight loss is still key, and can be achieved through soaking hay, grazing muzzles and reduction of simple sugars and starches in the feed. Likewise, exercise is important, not only in aiding weight loss but in improving insulin sensitivity.