You know, it’s a bit of luck that I was able to put paw to paper, as it were, today. My mistress keeps warning me that I’m in danger of having my collar felt — for chasing squirrels. 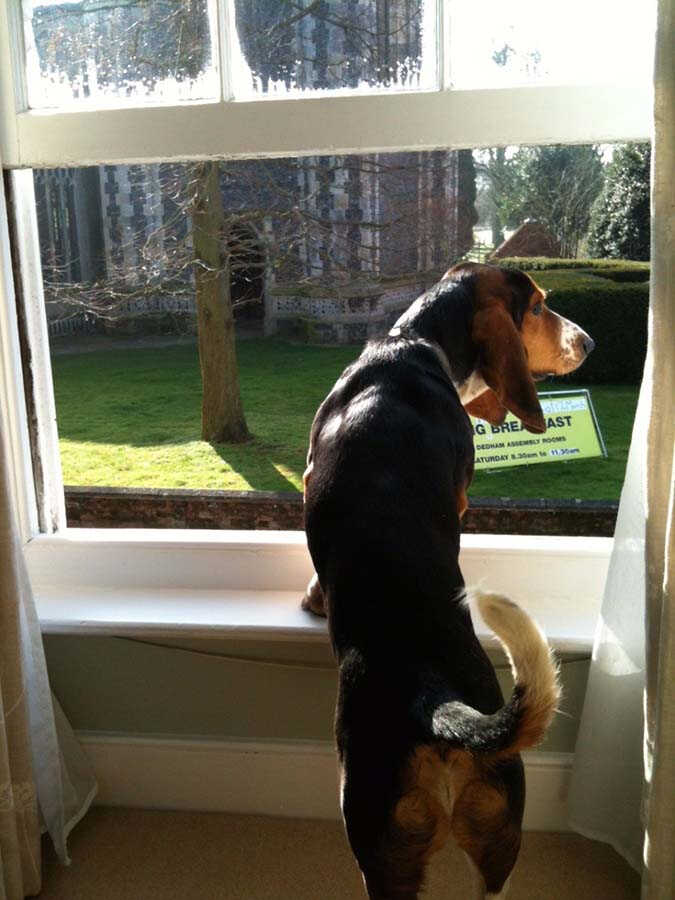 Being an urban hound, I rarely get a whiff of my natural quarry, the hare. But tally ho and all that — our part of London is teeming with squirrels (though they’re terribly unsporting – they keep disappearing up trees), while Reynard is a frequent visitor to our garden.

It’s a funny old thing, the basset’s hearing. I may not be able to hear my mistress calling me in the park from a distance of, say, 20 feet. But should Charlie hop over the fence, quick as a flash I’ll be hooning down to the kitchen, hurling myself against the back door and sending the scoundrel on his way even if I was fast asleep in my basket by the fire. All this accompanied by some splendid, top-level barking in my rich Basso (or should I say, Basset) Profundo, until She Who Must Be Obeyed (But Not Always Straight Away) comes out and drags me back inside. Apparently some spoilsports have banned fox-hunting!

A basset’s nose is even keener than his ears (second only to a bloodhound’s, so I’ve been told). A useful thing, that. I might be up in said basket, having a snooze, when the old olfactory glands get going, informing me that She Who Must Be Obeyed has just opened the fridge. Or someone has dropped a chip three streets away. There’s only one thing a basset likes more than foxes — and that’s food.

In our house we’ve been ‘blessed’ by two hairless human puppies. They make the most frightful racket and are forever mowing me down with their scooters, but I’ll say this for them — they’re the perfect height to deliver a basset a snack. Sandwiches, breadsticks, Babybel cheeses, even ice-creams — in they all go, straight into Wellington’s mouth. If I time it right, when she’s not looking, she blames the human puppy’s wails on his brother — thinks he’s bashed him again. Cunning, that.

And that basket under the Bugaboo contains the most tremendous bounty. Used wet wipes? Yes please! Dirty nappies? Nom nom nom! And meal times are manna from heaven (well, the kitchen table) for hounds. Let’s just say that she never has to go round with the Dyson hand-vac when old Wellington’s around!

After eating and hunting, I’m very partial to a jolly good sing-a-long. Sometimes when she leaves the wireless on, that Bryn Terfel pops up on Radio 3 to accompany me. He tries hard, bless him, but he can’t really do justice to the deep notes, like a basset can. As a special treat, I was allowed to stay up to watch Last Night of the Proms. It was sweet of Jonas Kaufman to duet with me but I thought he was jolly silly when that lady threw her knickers at him, not to pick them up with his teeth and run off with them, growling ferociously. What a missed opportunity!

The perfect day for me involves food, and lots of it. Something small and furry to chase, some singing, ideally and, of course, some scenting. Though She Who Must Be Obeyed simply refuses to see that every single tree on our daily walk (not to mention all the lampposts, walls and blades of grass) needs a liberal dose of old Wellington’s wee. There’s nothing that can’t be improved by Wellington cocking his leg. Apart from Tai Chi, apparently — the old folks who do it in the park every morning didn’t like it at all when I lifted a leg on one of them. They weren’t very ‘zen’ after that. The lead was clipped straight back on and my mistress marched me home at the double. There’s no accounting for taste!

I must be off now; duty calls. I can’t be sure but I’m fairly certain a packet of crisps is being opened downstairs and it would be remiss of me not to investigate…