Signs of Colic in Horses

Colic is quite a well known illness that occurs in horses. It is to do with the horse’s digestive tract. There a couple of different types of colic. Spasmodic Colic: This is where gas fills in the digestive system and causes a huge amount of pressure, making it very painful. The most dangerous type of colic where the digestive tract twists. This causes extreme amounts of abdominal pain for the horse and is the hardest to treat. Treating gaseous spasmodic colic is simply like popping a balloon to let the extra gas out but can still be a risky operation. Protect your horse from colic with Harry Hall’s equine colic insurance.

Spot the Signs of Colic in Horses:

- Constant attempts to lie down and roll

This is when food, bedding or other materials get stuck in the horse’s digestive tract. It can be caused because a horse is dehydrated, they have eaten something they shouldn’t have or from food getting stuck. It can be very painful and causes a lot of pressure on the abdomen. Surgery is usually the last resort for impaction colic and could include sections of the intestines being removed as they are dead and holding the trapped materials. 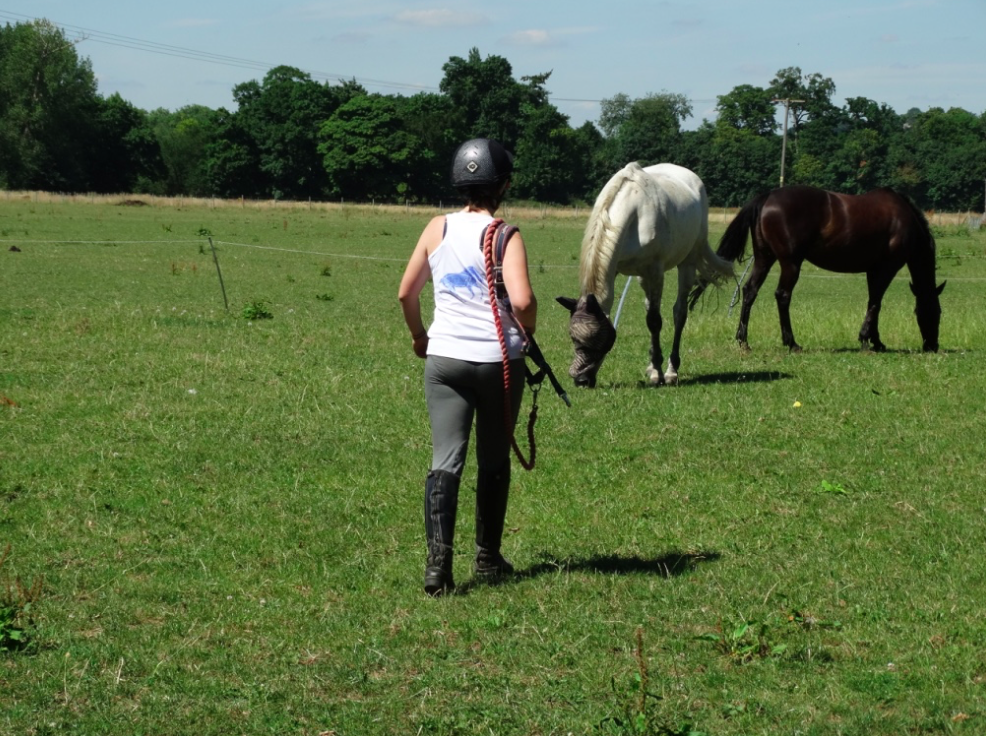 Spot the Signs of Impaction Colic in Horses:

- Doesn’t want to eat or drink

On Wednesday 19th July 2017, I went to get my horse Dude out of his stable to exercise him. As I went in I saw that he was lying down. This didn’t bother me as he likes to lie down and rest a lot, but the thought crossed my mind. He got straight off and I then hosed him down as he was filthy from lying in his wee, and it was a lovely warm evening. He was acting no differently than usual, maybe a little quiet, but no different than if he was to have just woken up, but I wasn’t that worried.

It was when I took him back to tie him up that I started to notice he was looking very off and gloomy. At first I thought it may be him having a sulk that I’d washed him down, as he can be like that! So I kept an eye on him as I was towel drying him and grooming him. I then popped a cooling rug on as he started pawing the ground. This is quite normal for him as he gets very impatient. But then he started bending his legs, as if he wanted to lie down.

The thought ‘it might be colic’ then crossed my mind again; but I put it aside as I knew he always loves a roll after a bath, as do quite a lot of horses! The area where I tie him up, is a sand/stone pen so its quite a nice surface for them to roll. So I let him off as I would any other time to have a roll. . . This was where it clicked for sure. He lay down flat out and closed his eyes. It was very scary as to do it so suddenly like that and not even paw or circle, and lay flat out, I definitely knew something was up. My friend on the yard came over to help me get him up but he wouldn’t budge. I offered him food but he wouldn’t even sniff it or open his mouth. I got very worried but I knew the best thing to do was to stay calm.

Luckily there was a vet at the yard who came over, he checked Dude all over and gave him a painkiller and some gut relaxer, it seemed to work well and he was straight up and we were walking him around. His temperature, pulse and respiration were all healthy and normal, so we had the all clear to put him out in the field for the night. We watched him for about an hour and he seemed well, he wasn’t eating as much grass as usual but we were going to come and check him throughout the night every few hours.

Twenty minutes after we had arrived home we got a call from a friend who said that Dude was lying down in the field again. We raced to the yard and rang the vet. When we arrived Dude was looking drastically worse, his eyes were more sunk in and his gums were white. We got him up and started walking him around.

*Tip: A good way to get a horse up that is colicing, as brute force and pulling doesn’t usually work; is to get them lying up (picture right) and stand behind them, bend your knees and lean into their backs, it isn’t the most comfortable and you may feel a bit mean, but it is much better to get them up, than to leave them lying down.

I walked him round and round while he occasionally tried to lie down and I had to hold him up to make sure he could stand for when the vet arrived. Once the vet arrived he did a full examination, which included a rectal examination and a gastro examination to check for fluid in his stomach. Luckily there was no stomach fluid, but the vet did feel something which he thought was a blockage in his small intestines. 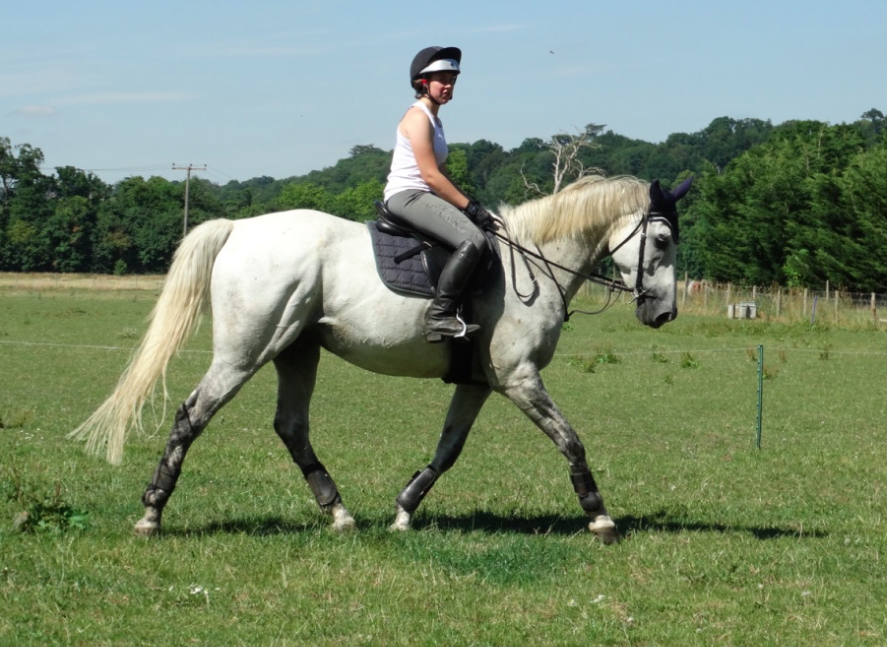 The vet said we were lucky to have found it early as he wasn’t violently colicing but he was obviously in pain and had started to kick his belly. The Vet told us to get our transport and take him straight to the nearest veterinary equine hospital as he may need a scan to confirm it and possible surgery.

So off we went to Donnington Grove in Newbury at 10:30pm. We arrived at around 11:15pm and he went straight in for an ultra sound, he was such a good boy to travel and was so good while they were checking him all over, scanning him and giving him injections. The vets all came to the conclusion that he would need surgery and confirmed what the first bet had said, that there was a blockage in his intestine that need to be removed, impaction colic.

At 12am, we left him just as he was being given the anaesthetic for surgery. It was the most heart-breaking thing having to sign the paperwork to say that we authorize the humane putting to sleep, if he wasn’t to make it and/or it was the best option due to the amount of pain he may be in. But they had to be signed before they could start surgery in case of any complications. It was the longest car journey home and I didn’t get any sleep until I got a call at 1:55am from Bruce Bladon, the amazing surgeon that treated Dude, to let me know that his surgery had gone well and the blockage was removed safely. I slept a little better until 2:33am when I got a call from the vets to say that he was awake, up and in a stable. I felt so relieved and definitely slept better after that!

We went to visit him the next day and he was feeling very sorry for himself, but was definitely a little chirper! All the vets said it was so lucky that we caught it so early as if it had happened after we had left in the evening and we weren’t aware, he may not have made it to the morning. They also had found what caused the blockage, and it was his bedding! Dude has obviously got a bit peckish in his stable so decided that eating the rape seed straw bedding was the next best thing once his hay had run out.

We were told he had to stay in for a few more days to finish his course of antibiotics and so they could monitor him to make sure everything was working as it should. The vets were amazing and rang us twice a day to let us know how he was doing!

I was so happy to hear that we could pick him up on the Sunday 23rd. When I went over to him he whinnied at me, he was definitely back to his old self! They even gave him a lovely bath and he was gleaming to come home. He travelled back like an angel and all the assistants said they would miss him as he is such a kind and gentle horse.

We then put him to bed in his newly sprayed, wood shavings bed and soaked hay net. We checked on him throughout the night just to be sure but he seemed perfectly fine!

It is now one week later and Dude is doing great, although he is not too happy about 1 month’s box rest, and 1 month’s field rest before he can be ridden again; his big scar on his tummy from his operation his healing well and everyone on the yard is checking up on him when I am not there and letting me know he is okay.

He was such a brave boy and is so special to go through that and act like nothing ever happened! We do not see why he shouldn’t make a full recovery!

Although it was probably one of the most terrible nights of my life, I definitely learnt a lot from the whole experience and has definitely made me cherish the moments I have with my horse’s even more as you really never know when something could happen!

Make sure to follow my Instagram www.instagram.com/mstouteventing to see frequent updates about Dude and how his recovery us going!

Also make sure you are aware of the most common horse diseases, illness’ and poisoness plants, as luckily I have studied and witnessed colic before so I was able to see the signs early. Make sure you can too!