Hi! So in January last year, I tore my Anterior Cruciate Ligament (ACL) whilst playing netball, then had to have surgery to reconstruct this in September. As a result, I couldn’t ride for a good few months, and I’m still just starting to get back into it. Therefore, I decided to share some of the ways I kept myself busy around horses and still managed to be active at the yard, despite not being to ride. As I mentioned, for me, this was a case of me being injured and not being able to ride, however some these suggestions would probably also work if it was your horse that was out of work rather than you!

First of all, my advice would be to get back into it as soon as possible. I put off going to the yard for a while after my injury and surgery because I wasn’t sure if I could bear watching everyone else ride but being unable to myself, but ultimately it made me feel so much better just to see all the ponies! 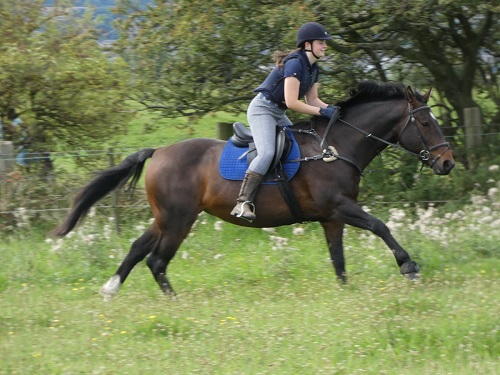 Give your pony a pamper

If you’re anything like me, I know that a lot of the time my “grooming” consists of flicking a brush over Lewi to get the worst of the mud off and make sure where his bridle and saddle sits is clean, then tacking up. Particularly in the winter months, we often just don’t have the time to give our horses a proper clean. Being unable to ride gives you the perfect opportunity to really take the time to give your horse a full groom, maybe even practice plaiting up as well in preparation for those summer shows. Obviously, this also means that you can get some good cuddles!

Before being injured, I had never really needed to lunge a horse properly before. But as I was still loaning Lewi even when I couldn’t ride, I decided to give it a go to try and give him some sort of exercise whilst I was out of the saddle. Lunging is perfect to keep your horse active and was also something new for me to learn, and I definitely saw a progression over the weeks- at first, I spent most of it saying “woah” repeatedly whilst Lewi cantered at top speed round me in circles, but by the time I was ready to ride again he was listening properly to my vocal cues (most of the time!) This Cottage Craft Lunge Line is designed to accurately work your horse with this clever lunge line with metre markers.

On a similar track to lunging, giving some ground work a go and just having a play about with your pony can be a great way to keep involved in the horsey scene. Have a go setting some cones out and weaving in and out from the ground, see how far away you can get your horse to do it from, and any other ideas you can come up with. Our Cottage Craft Training Pack is a fab starter kit for working on ground work.

So mine and Lewi’s attempts at this were… interesting, to say the least! I essentially just set up some jumps in the arena and encouraged him in their general direction- Lewi adores jumping so had great fun, although did end up galloping madly around the arena for a good five minutes. In retrospect, and after watching others do it (better than me), I’ve found that tying a lunge line from the end of the jump to corden it off, or using more poles/ jumps to create a sort of channel works better to ensure that your horse jumps the jump and doesn’t veer away. All in all though, I found this great fun! On a side note, I think it also helps build confidence for jumping- once you’ve seen your horse jump something without you on its back, you feel much better about giving it a go!

Hopefully these tips are useful to you, obviously they’re not an extensive list and just some ideas to get you started. If you have any questions or want to chat to me about anything, you can always get in touch with me via my Instagram, lucy.lewi , or my Twitter, @lucybell345.

For more top tips and updates, subscribe to the HarryHall.com newsletter and recieve 10% off your first purchase...