On a very wet Wednesday morning last week, I packed Herbie’s overnight bag and we trucked off for an intensive dressage camp at the Moody Headquarters. Herbie and I have qualified for summer regionals in both Elementary and Medium and having had a taste of the winter nationals earlier this year I’d love to qualify for the summers so it was time to up our game! There were six of us on the camp, all competing at different levels so it was really nice to meet some new people and chat about where we’re currently at and what we’re doing to progress. 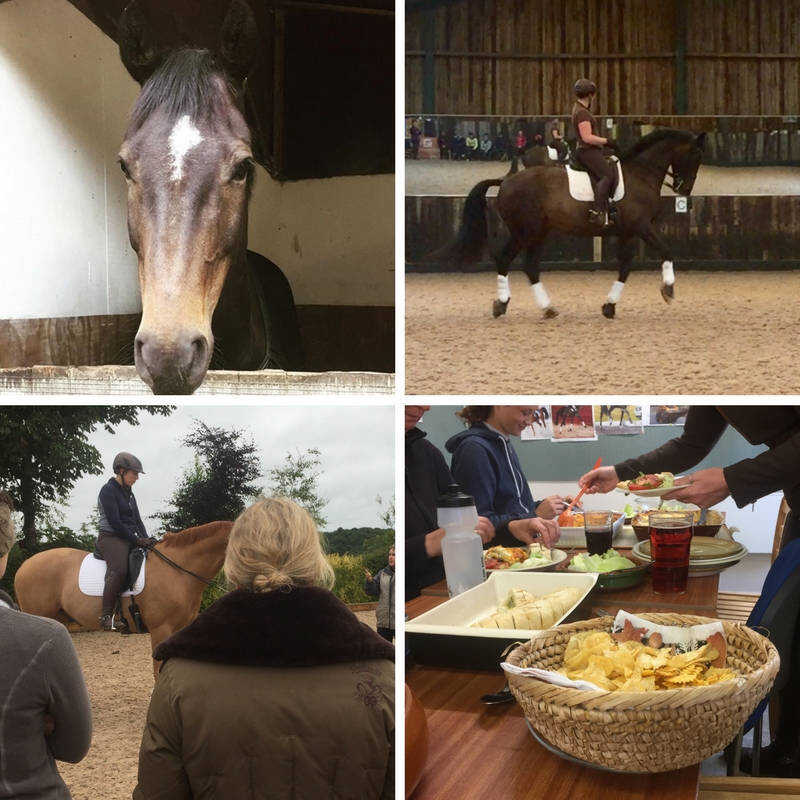 The two day camp kicked off with a Pilates session which was great, I already do Pilates once a week and find it really beneficial but this had an equestrian focus so gave me lots of new exercises to go off and practice. Next up was a session with Becky (Moody), she knows Herbie and me quite well now and is very thorough in our training. We are currently competing at medium with the view to moving up to advanced medium later this year so we’re working on movements such as half pass, walk pirouettes and travers. Herbie went really well in the session and I feel we’ve made a lot of progress recently.

Following our ridden session I moved on to a 1 on 1 rider profiling and goal setting exercise with Hannah (Moody). It was really useful to discuss where we are currently at, where we want to be and what we need to do to achieve that. We spent the rest of the afternoon watching Becky (in their lovely dry indoor school!) ride a variety of horses from a just backed 3 year old to her top Grand Prix horse, Carinsio (and everything in between!). We asked lots of questions and she explained who they were and what she was doing…something to aspire to!

We had a lovely dinner that evening, a few glasses of wine and the chance to compare notes at the end of day one.

After a good night’s sleep in the lorry it was onto day two. We started with test riding, they had got a BD judge in so we took it in turns to run through a test of our choice (I chose our medium test for regionals), we were filmed, given feedback from the judge then watched the video back with Hannah and Becky. It was so helpful to be able to reflect on the test from a judge’s and trainer’s point of view. I wrote a lot of notes but the two key things I took from it were: 1) I need to improve my preparation as the moves in the test come on us thick and fast, and 2) I need to take a risk to really make Herbie sparkle, don’t settle for ‘just nice’!!

Following the morning session of test riding I had a final training session with Becky to work on some of the areas we had highlighted that morning.

It was fantastic to really focus on our dressage training for two days solid and I’ve come home feeling inspired and clear on where I need to go from here. Becky, Hannah and their family were great hosts and it was lovely to get to know some new people. It’s now all systems go in the countdown to regionals (Port Royal EEC in July).