Horses Are A Roller Coaster

Lucie Wells, our first Caldene Rider of the Month, tells us about the horsey highs and lows she’s experienced that marked her out amongst our applicants. I’m Lucie Wells, a 28-year-old marketing manager, wife and dedicated rider (not necessarily in that order!) based near Stockbridge in Hampshire. And I’m very proud to have been chosen as the first Caldene Rider of the Month.

My horse Sprite is a 14-year-old chestnut former racehorse who has rather exceeded expectations; he’s my absolute horse of a lifetime, and I work hard to keep and compete him. I bought him 5 years ago to do BE100s in eventing, but over the years we have grown in confidence together and Novice level fences began to feel quite easy in training—as a result, we contested our first Novice event at Smith’s Lawn in Windsor Great Park in August and having successfully produced a double clear we entered Caldene’s Rider of the Month competition. 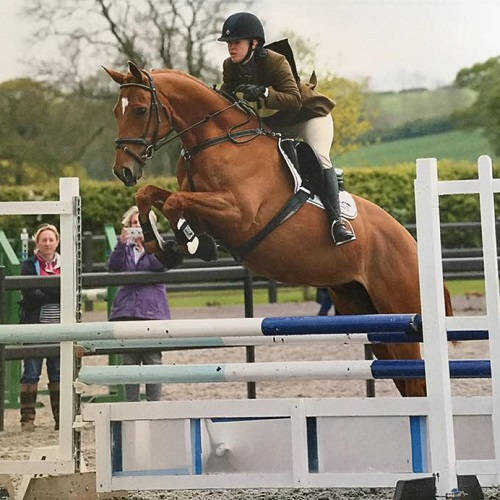 As I work full time, it takes a lot of organisation to ride six times a week — usually early in the mornings — and to fit training in with my instructor, four-star eventer Gubby Leech. The secret is to plan well in advance, to have a DIY yard with a yard manager on site so if work takes me away for a day or two they can cover — and I have a very understanding, non-horsey husband. I also schedule what I plan to do with him each week and set certain goals.

I like Thoroughbreds since they have the blood to make the speed and the distance required across country. But they usually have slightly quirky characters too which makes things interesting and fun. The other thing that helps me juggle everything is that Sprite is a very obliging horse who doesn’t mess around when you catch, groom or ride him. You can ride him for just 40 minutes or so sometimes and feel you’ve achieved your goals for the day.

Our achievements this year have been extra special because Sprite became very ill early last year with pneumonia. It turned out tiny morsels of food had been accumulating in his lungs over the years as a result of a tie-back operation he’d had when he was in race training. At first it appeared as if he was colicking but he developed a massive infection in his lungs and ended up in hospital for about a month and a half being treated.
He pulled through but lost a great deal of muscle, so for several months I worked him from the ground in hand, and used an Equilibrium massage pads a lot too to build his strength and muscles back up.

After the high of achieving our first proper British Eventing point for a double clear at Novice, and a really good result in a BE105 class at Wellington, Sprite recently appeared uncomfortable as if he had somehow tweaked himself. Further veterinary investigation has shown up arthritis in his back and kissing spines, sadly this has cut short our very successful season, however the vets and I are optimistic that with medication and rehab Sprite will be back out eventing next year! We’ll just take things slowly and see how things play out.

With Sprite I’ve experienced immense highs and some really heart-breaking things like this. I’m sure it’s a familiar pattern to many horse owners, but as we navigate the next steps and challenges, it is lovely to have them recognised — and those of other hard-working amateurs too — by the Caldene Rider of the Month programme.