Hi! I’m Naomi Oliver, aged 7, and this is my pony Hallie. She’s an 8 year old Dartmoor Hill Pony – and the prettiest pony I’ve ever seen! We bought Hallie a year ago as a second pony for me, but as she hadn't done much, had never competed, and had been out of work for over a year she has turned to be quite green and mischievous! We've done lots of different things over the last year, but about 6 months ago we did our first dressage test and loved it! Since then we have been focusing on dressage and made good progress qualifying for some great shows.

1. Pony stuff (everything she will need over the weekend)

And with those two covered at least we could complete … the most important part!

3. Camping gear - because my mum is 'thrifty' (mad) we camped in the wettest part of the UK only a week after the beast from the east!

4. Clothes and essentials for the whole family, because any horsey person knows this is the least important! 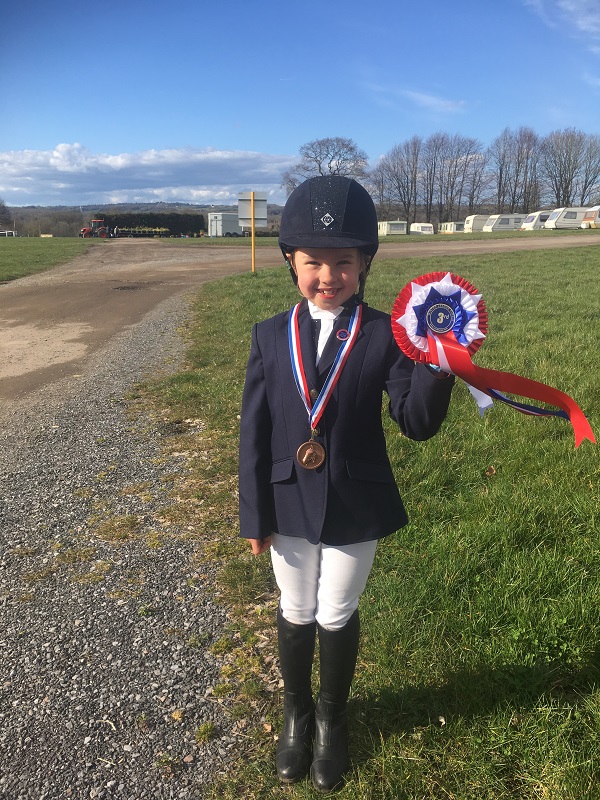 Being organised is key. We packed what we wouldn’t be using in the days running up to our departure and ticked it off our list – we did things like packed the trailer with bedding, hay, buckets, and anything else possible beforehand to try and keep last minute chaos is kept to a minimum. We had been practicing our tests and trying to improve our accuracy … and mostly working hard to perfect those circles – “Mum it's hard when your only 7!!”

On Thursday night we were still deciding whether to set off at 4am to get there for the 9am warm-up test, or to leave later and have a leisurely drive up with no time constraints … bet you can guess which one had Dad's vote! Mum and I thought leaving early would give Hallie the best possible start as she has never been to a venue this big and busy, and we didn't know how she would behave … after all, she can be pretty hard work at times! So that was it! Alarm set for 4am. Mum thought if she got us in the car in our pyjamas with our duvets, we would sleep all the way to Wales … How wrong was she?! We were wide awake before we even picked Hallie up.

After a very long journey we finally arrived, with not much time to get plaited and ready to ride. Hallie was lively in the warm-up and not really listening to me, but we headed into the huge ring where 4 dressage arenas were running simultaneously, something we had never encountered before. It was just as well we came for the practice test – she was quite overwhelmed by the whole thing and carted me right out of the arena before we’d made it down the centre line!

At home Hallie lives out 24/7 and plays up more if she's been cooped up in a stable so we think this was partly to blame for her behaviour. So I made sure I brushed her, read to her, and took her out for grass a lot to keep her mind busy. On Saturday Hallie was still pretty cheeky but we completed both tests only leaving the arena briefly to gain 7th and 8th place and carry a 66%+ score towards the 'final' – Mum and I were really pleased!

After another cold night in the tent the last day was upon us and for the first time the sun shone! I meant business today: I wasn't going to let Hallie get the better of me again. I really tried my hardest in both of my tests to be accurate and keep control, and it paid off! We had such a successful day, coming second in both of our tests and taking a 72%+ score through to the final. I really couldn't believe how well we had done and was over the moon Hallie had behaved! Although at first I was disappointed I missed out on a win, but my Mum reminded me I was bonkers and should be so proud to have achieved so much on a challenging, self-produced young pony.

At the overall prize giving I was delighted to have got bronze overall in my section the under 12's – I got a medal, a huge rosette, and even some goodies for Hallie. This weekend has been the biggest thing I've ever attended and it has taught me a lot, although at times it was really hard and I felt out if control, I kept on trying and eventually I managed to get her to behave. Some things feel overwhelming, but once you overcome them it feels so good! Never give up! But the best part about the weekend was having Hallie around – I absolutely loved being so close to her and being able to do everything myself. I mucked her out, did her hay, water, and feeds, and brushed her all the time… Mum said she had to peel me away!

My favourite Harry Hall product so far and the one thing I couldn’t be without now are my Edlington Riding Boots. I use them every day and for competitions, and when paired with my black Blouson Jacket we look smart wherever we go, not to mention extremely warm and dry. I spend so much time in them; they are hard wearing, comfortable, and look so good! They’re easy to clean and true to size – a great addition for any rider’s collection. But after all the rain in Wales I am definitely looking forward to the warmer weather and trying out the summer collection!