It’s time to meet a One Club member, and one aspect of the Harry Hall One Club we have always been proud of is its inclusivity. From day one we wanted it to be a club for every rider and it’s safe to say our membership covers a broad range of ages! This month we meet young rider, Evie, as told by her mum Clare, over to you Evie and Clare:

I started riding when I was two, on a miniature shetland called Declan who we had as a companion pony along with his brother Max. Declan was old and had never really left his field or his friends, so when mum and dad realised I liked horse riding, they took me to try a pony called Missy. When we tried her, I had to ride her bareback as there was no tack to use! She was so calm, and we liked her nature so we welcomed her to the family a week later. I loved riding her but couldn't master trot as her legs were so tiny and moved very fast, rising trot with Missy was quite interesting as you can imagine! I spent two years having the most amazing time with her. We went to Pony Club rallies and riding club shows, where we won a lot of lovely rosettes and at the end of the season, we had two trophies. As with most first ponies, sadly I outgrew Missy after a few years together and the search for a new pony began. 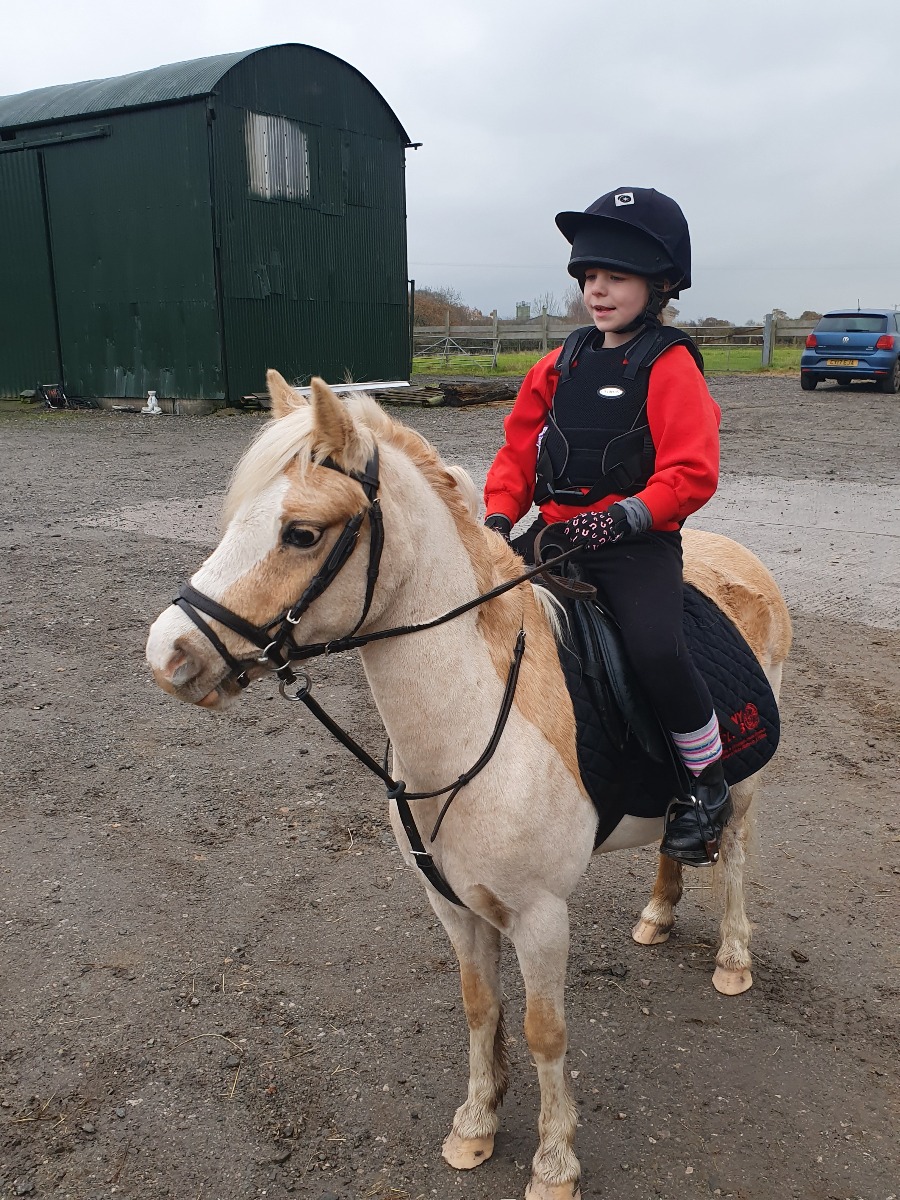 After a few viewings and a fall while trying an unsuitable one, we bought a pony a friend had rescued a few months earlier, Rosie was a coloured cob cross shetland and seemed to have been badly mistreated in the past which is awful to think about as she had the most lovely nature. We focused on putting some weight onto Rosie and gave her coat a good trim, she was a lovely pony under all the fluff! I rode her at a few Pony Club rallies but she was very green and my mum was worried about me riding her off the lead rein when not in an enclosed arena. Sometimes as much as you love a pony, the partnership just doesn’t work out.

We started looking for a more experienced pony and saw an advert for Coverdale Olympic Gold (aka Prince). He’s the first pony my mum has ever bought unseen, after numerous conversations with the owner and watching videos of him, we paid a deposit and set off to collect him, it took nine hours there and back! Mum knew that to progress and become a successful partnership with Prince, I needed an instructor and almost as soon as Prince arrived, I started having lessons with a lovely lady called Michelle. It just proves how valuable a good instructor is, Michelle has taught me so much and I had the most fantastic season in 2019, managing to accumulate over 100 sashes and rosettes from the shows we went to.

Joining the Pony Club has also been a great experience and I’ve learnt so much from the instructors there. Last summer I took Prince to my first Pony Club camp, it was a hoot and I learnt so much during the week and had a great time with all my Pony Club friends. I love going to Pony Club rallies and last month I achieved a golden badge for earning over 14 mini badges. The agreement of me having a pony was that I look after them myself, I do as much as I can with Prince, and I love it. I ride as much as possible, normally after school (when I’m there!) and this season we were hoping to do some working hunter and showjumping classes. Sadly, this will have to wait as we haven’t been able to improve as much as we wanted this year due to Pony Club rallies and limited time with my instructor. I'm lucky to be able to practise so much at home and next year we will be even better.

I enjoy reading the Harry Hall One Club magazine with Prince and I like to fill my basket on the Harry Hall website when mum isn't looking! My goal for the future is to be an eventer, and my mum says I have the determination to achieve this and succeed. I hope she’s right.