Should I Horse Ride When Pregnant?

Should I Horse Ride When Pregnant?

In truth, you are the only one who knows the answer to this question! This article will help you decide what is right for you when it comes to horse riding when pregnant. We’ll deliver some helpful facts, and we’ll also hear from two riders to find out what route they opted to take during pregnancy. We’ll look at the official NHS advice and give you some questions to think about that should help you reach a decision.

Before we get into the ins and outs of horse riding when pregnant, congratulations! You’re expecting, soon you’ll be joined on your yard chores by two small feet in a four wheeled horse spooking machine. And your horse will wonder how something so small can make so much noise. You’ll long for the day you can buy your new-born their first pair of jodhpurs and enter their first showing class on a super hairy, ancient pony who’s taught hundreds of children to ride and is ready to chuck their head down to munch on grass at any given moment.

So, now for the nitty gritty, should you horse ride when pregnant?

The Royal College of Obstetricians and Gynaecologists reports that women who exercise during pregnancy can benefit psychologically and physically. Exercising can help to reduce tiredness and prevent fluid retention as well as improve sleep and reduce stress. They encourage women to participate in exercise as part of a healthy lifestyle in the run up to giving birth, but just where is horse riding on the exercising scale and what are the risks involved? 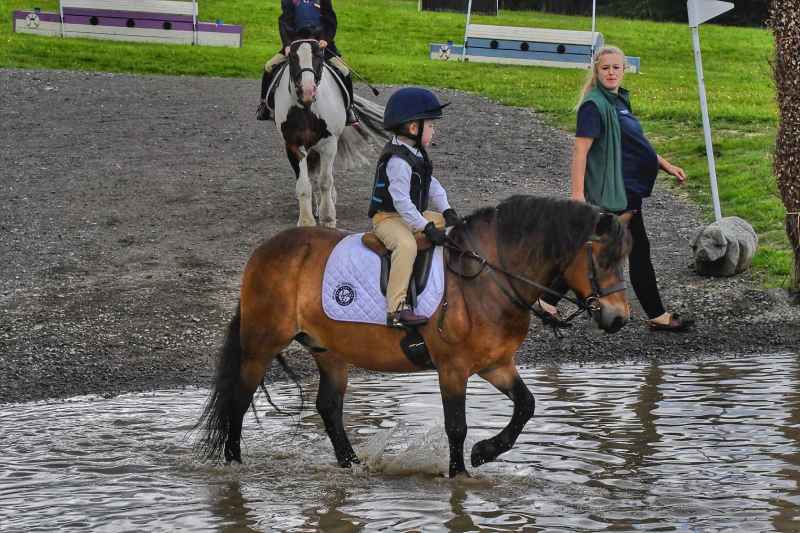 Is Horse Riding During Pregnancy Safe?

We’ll head straight to the elephant in the room, horse riding is a dangerous sport. We all know this and we understand the risks involved. Falling off is part and parcel of horse riding and that is why it is considered a less safe sport to participate in during pregnancy. Here are some things to help you consider how safe you’ll feel in the saddle with a small passenger on board:

The NHS advises that you should keep up your normal daily physical activity or exercise for as long as you feel comfortable. They also advise that exercise is not dangerous for your baby. There is some evidence that active women are less likely to experience problems in later pregnancy and labour. They do go on to say that taking part in exercises that have a risk of falling, such as horse riding, downhill skiing, ice hockey, gymnastics and cycling, should only be done with caution. Falls carry a risk of damage to your baby.

What should I wear horse riding whilst pregnant?

Made from 17 individual pieces of material which move and adapt to your unique body, Flexars are comfortable, flexible and extremely flattering. With a super-high flat waistband with no elastic, and no uncomfortable zips or buttons, Flexars stay comfortable throughout the day, and do not sag or fall down 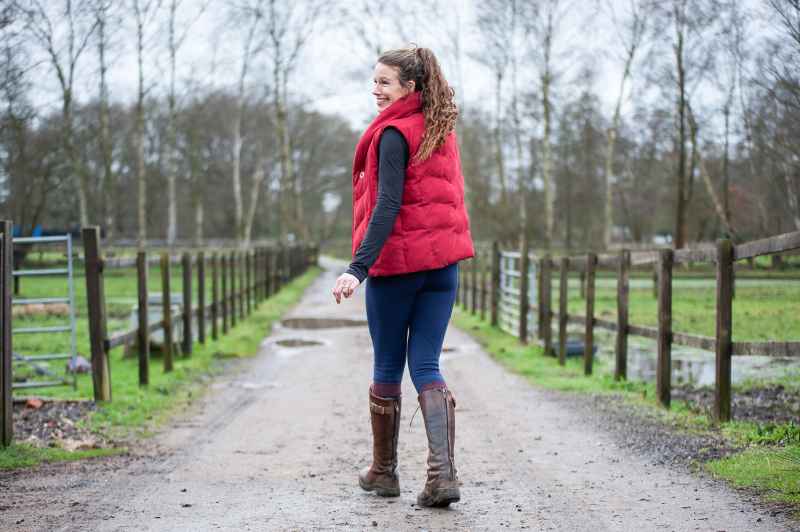 Eden Markl – a mum of two with three horses

“In December 2020 I found that I was pregnant with my second child. With my first pregnancy I owned a newly broken 4-year-old, she was sharp and highly strung! After finding out that I was expecting, I decided a break would do her the world of good, it would allow her to mature and process her education so far. It was the perfect time for a break, she had been out a handful of times, she was beginning to see the world and was developing into a gorgeous mare. So I stayed out of the saddle and let her enjoy some time with Doctor Green Grass.

This time round, carrying my second child, my circumstances were different. Alongside our ponies, I owned a 16-year-old, schoolmaster type. He had just had quite a lot of veterinary treatment on his legs and was due to start his rehabilitation. My plan was to get him through this rehab then do some dressage and hacking until I felt like the time was right for me to stop.

I began his rehab and he was coming on beautifully, he was enjoying work again and we were both enjoying each other's company. Unfortunately, through my second pregnancy I struggled with Symphysis Pubis Dysfunction (SPD), which caused me severe pelvic pain, something that riding was making worse! I was devastated when I had to hang up my riding boots, but I didn’t feel I had a choice in the decision, walking was painful at this point!” 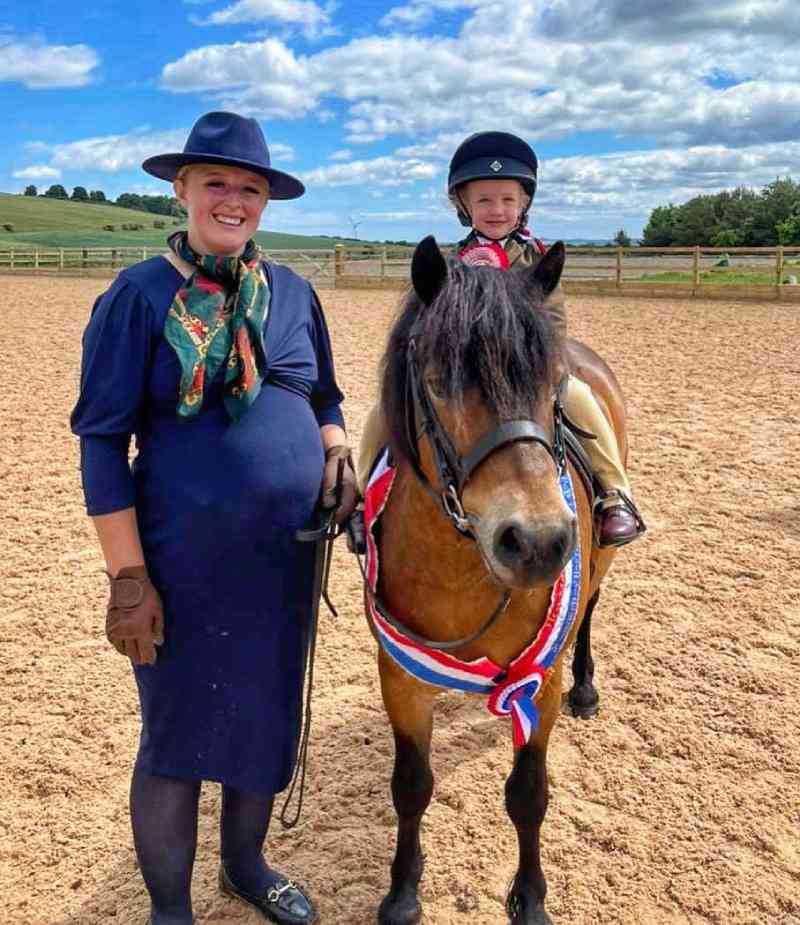 “When I found out I was pregnant, I was eight weeks along, and quickly decided to take a step back from riding my horses as much, mainly because my main discipline is eventing. The risk was higher, and I based my decision solely on my own horses and their behaviour. I kept riding my older horse just hacking him out, as he’s super safe and I trusted him. I got someone to keep my ex-racehorse ticking over as he can be quite exuberant at times, and I didn’t fancy turning him away for seven months.

I run a livery yard for a living and riding is part of my job, thankfully we have a yard of super horses, so I managed to keep riding them for a while longer. I decided when I got a bit bigger to stop as I felt I wasn’t doing them any justice with less balance and loss of fitness. I was riding for my own sake and no longer having as positive effect on the horse as I’d like. I think it’s such a personal choice if you choose to ride or not as long as you feel safe!” 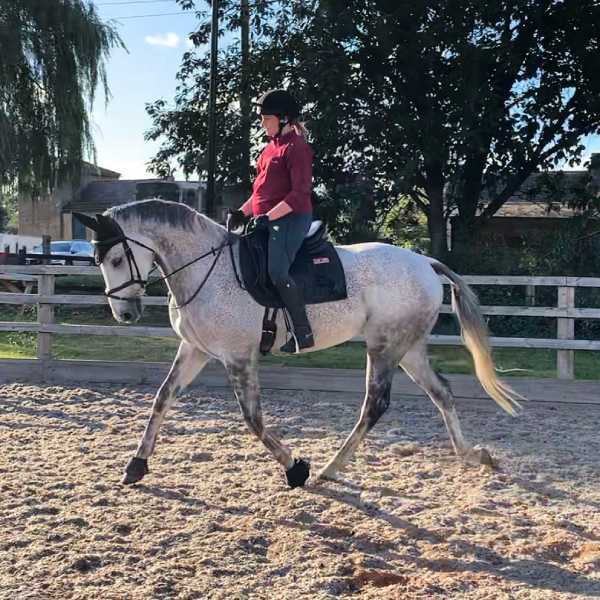 Previous 5 tricks to save money every day as a horse owner Next Listen to music when you ride? You HAVE to try this
To Top