The Girl In The Blue Boots

I'm Alanna Clarke, I'm 14 years old and a massive Tottie fan. I love standing out and wearing bright colours and feeling comfortable all at the same time and Tottie fits the bill perfectly!  I take part in British Young Rider Dressage Scheme (BYRDS) training & regularly compete in dressage with my Trakehner mare Singing Lantana III (known as Katrina).  Katrina was a broodmare until summer 2015 when I bought her,and it's taken dedication and a lot of hard work to progress with this inexperienced horse. 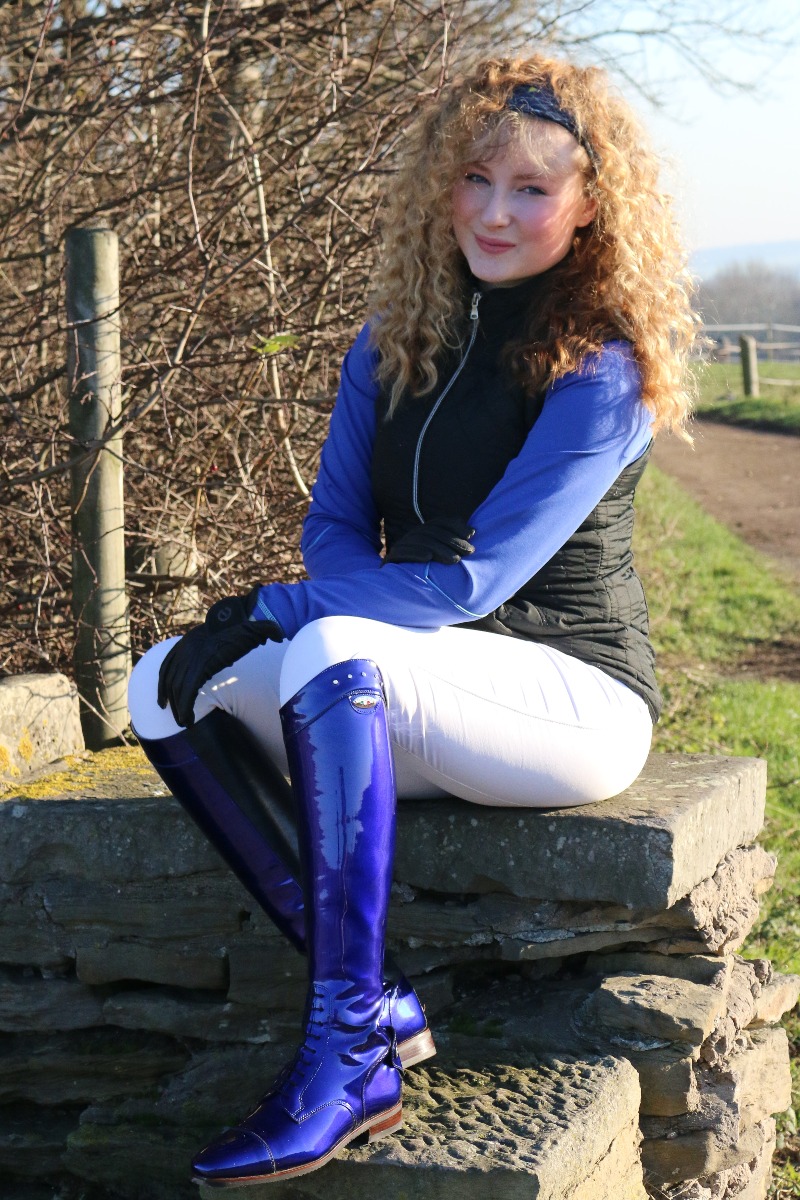 From the first moment I saw the blue boots I knew I wanted them. Shiny electric blue boots that gleamed even in the dullest light just seemed to beckon to me.  Every time we were at a show, I would search out the seller to find "my boots" if only just to look at them.

I guess it's fair to say I had a little bit of an obsession...

Finally, on Christmas 2016, I unwrapped a box to reveal the very boots that I dreamt of. I actually cried, I was so happy to see them, they were truly mine to wear! Complete with a black jacket with matching blue piping, and a confirmation Email from British Dressage saying that I could wear them, I was ready to compete looking fabulous.

Before I decided to wear them in competition I knew that I ran the risk of judges finding them distracting, but to me that just seemed like an incentive to ride even better so that I could make up for any points lost. Soon enough, news spread of a girl competing in blue boots, and an article about me and the boots appeared in Horse and Hound. They used a photo of me wearing my Tottie breeches and the infamous boots.

Knowing that there might be backlash and that people might look down on me for wearing them, and I had a long chat with mum when I first got them so I'd understand what might be coming. After the article came out, I read the comments on the Facebook page even though I was warned not to. Immediately the boots divided opinion, some people loving them and others expressing disgust, there was no in-between. Most of the reactions weren't directed at me personally, so I wasn't worried by them, after all everyone has their own opinions and the world would be a boring place if we were all the same. One comment that did get to me a little was someone saying "All the gear and no idea," a phrase that I sometimes used to describe myself jokingly. It stung to have someone else saying it, especially as we’d just had a character building day competing so I was already a bit down. It made me doubt myself a little, which sounds silly when it's only one comment from lots.

I wasn't down for long though as I read the replies, people who I hadn't met were kindly defending me, reminding some that this is a 14 year old girl they were discussing. I didn't comment or get involved, because people should be allowed to have their say. Some of the reactions to comments made me smile, replies to sarcastic comments immediately being shot down with another from someone else. I’m happy that so many people loved them!

Something I learned from this experience is to not let other people’s opinion get to you, be your own person and do what makes you happy. I didn't wear those boots to turn dressage into a fashion event.  I wore them because I thought they were beautiful, and I felt good in them, and because they gave me confidence. If people have a problem with that, that is their problem not mine, they have their own ideas and their own opinions. Sometimes people just need to remember that you shouldn't drag someone down for being different. From the clothes you wear to anything else, you should allow them to be themselves rather than forcing your own views on them.

Me? I will continue wearing my boots as long as BD allow me, because I love them.