Understanding which breathable boots are best for your horse

The horse’s leg is made of many bones, joints, and muscles with a complex structure of tendons and ligaments that support the weight of the horse’s body.

Heat in the leg

Alan Wilson and Allen Goodship (1994) at the University of Bristol showed that the temperature inside the tendons of horses galloping without boots on could reach 45°C. This is only the second-highest to muscle temperatures.

Generally, the blood supply can help remove heat from an area. Tendon temperatures are high due to heat production within the tendon itself with loading and unloading but also because tendons have a poor blood supply. 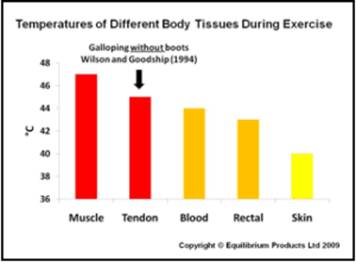 Are these temperatures a concern?

In 1997, Alan Wilson and Allen Goodship published the results of a scientific study in which they showed that isolated tendon cells in culture were sensitive to heating.

What happens when a boot is used on the leg?

These results were also confirmed by a more recent study of equine tendon cells in Japan (Hosaka et al. 2006). This study also showed that the higher the temperature, the more tendon cells that died.

Not only do some standard boots or bandages have the potential to heat up legs further, but they may also stop a sweaty leg from ‘breathing’.

When skin is in contact with moisture for a long time it becomes hyper-hydrated; similar to the effect you see if you stay in the bath for too long.

Wet skin cannot “breathe” normally, and it becomes more permeable allowing greater absorption of anything on the skin. Wet skin also carries an increased risk of abrasions and grazing as well as being more susceptible to bacterial or fungal attack. 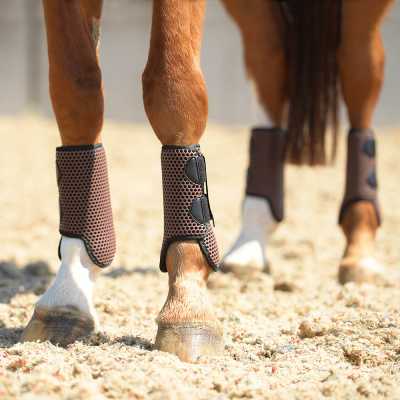 Considerations when looking for a breathable horse boot

Many boots claim to be breathable but some are more ‘breathable’ than others and the main thing to take note of is the material(s) used in the boot and the boot structure.

Here are a few questions you should be asking when looking at breathable horse boots:

You might want to do some research on the materials used within the boot you are using too. 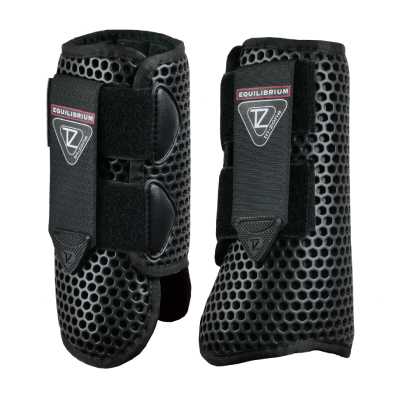 Choose the right boot for the job

Primarily horse boots are worn to protect the horse’s legs during exercise or turnout. Think carefully about the right boot for the activity you are doing. Often a highly protective boot isn’t necessary for low-level schooling and will often be bulky and heavy and without allowing the horse’s leg to breathe. Could you opt for a lighter boot in this instance?

Limit time on the leg

It is important to choose boots or bandages that allow a good rate of heat loss and that they suit the exercise being completed at the time. Also, consider the length of time boots and bandages are worn by the horse and cool down legs as soon as possible once the boot is off the leg.

Extracts included are from The Pros & Cons of Equine Boots

When developing boots not only do Equilibrium Products source advanced technical fabrics with breathable properties, but the boots are tested in an independent laboratory to make sure they are protective, breathable, flexible, and lightweight.

Check out the range of Equilibrium products available at Harry Hall here.