A Friesian and a Film Set

Coffee in one hand. Reins in another! Let’s begin with some context. I am Canadian, born to South African parents in Toronto but raised, educated, lived, loved and left England - just two short years ago. On this epic return to the homeland, and akin to Noah and the Ark, came three kids, one husband, one mother, three dogs, two cats and three Friesians who are the reason of course for this blog. So, where do I start? I thought about this and wondered what anyone would like to read about. Obviously, you want to know their names. So we will naturally have to start with Demy, simply because she came first.

Demy is a 1st premie ster mare so translated, the powers that be thought she was a nice model, but that’s far from the most interesting thing about Demy. Since we arrived here, Demy managed to bag herself a major film role in the Knight Before Christmas and gamely carried Vanessa Hudgeons through a packed film set, ran at liberty through a forest through smoke and generally slayed it.

How did this come to be?

Well, it is true Demy is not trick trained - or came to Canada with any film experience. She is medium-level trained at dressage but all that fancy footwork to be honest meant nothing to Netflix. Actually, what sealed the deal was her trainability. And interestingly, I was told this by a trainer I came to know in England. He said to me (pearls of wisdom) that whatever happened to me I was not to sell this horse as horses like her are as rare as rocking horses. This has nothing to do with talent, movement, this is the horse’s brain, her heart and her willingness. It is unsurmountable. And she can go from (a modest) half pass to a rock-solid film horse in the blink of an eye. So there was never a question of leaving Demy behind - plus she is the first horse who did the decent thing and paid for herself for the foreseeable future. 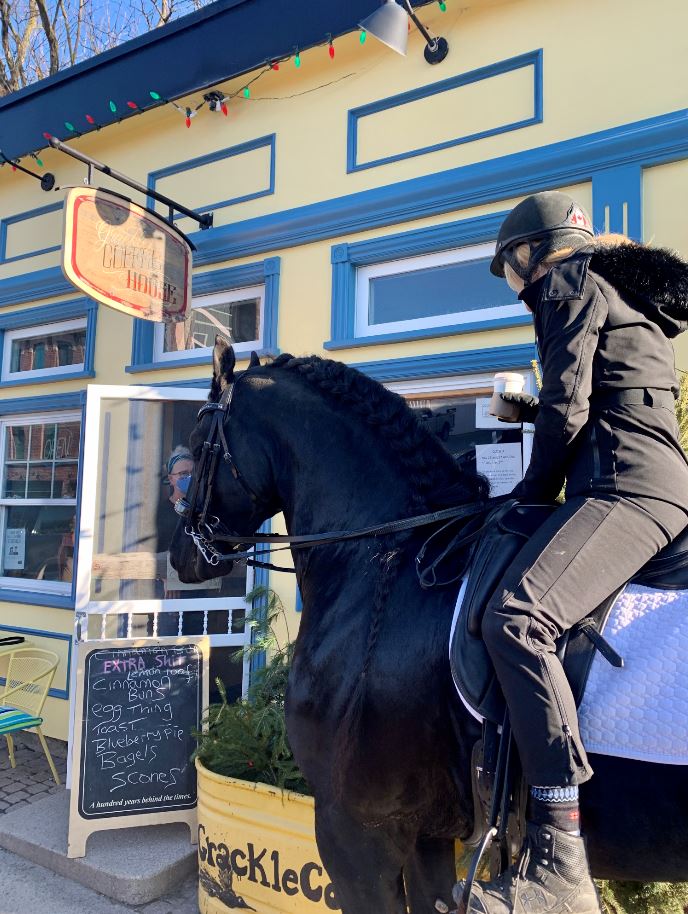 The second member of the clan:

We then come to Nick - my “Tom Hardy” dream stallion who looks like an oil painting, we certainly could not have left him behind either for a number of reasons. Firstly, he is so aloof with most humans he simply can’t be bothered to give them the time of day. He makes no attempt at speaking to anyone except me and has complete contempt for any male in my vicinity - so really he is my bodyguard. Secondly, he takes delight, especially now older, wider and stronger in leaping about Capriolle style - at nothing (this is a Friesian trait - off the leg is not an issue). Finally, how many stallions do you know that you can ride into town, order a coffee using full Covid protocol or ride through a parade with a psycho clown banging symbols behind you and smash a medium test at seven? I think the horse would walk through fire if I asked it of him….So Tom “the handsome one” stays …..like that was every beyond question.

And the final Friesian to introduce you to:

Tys aka Moose. Bought on a whim and in relative secrecy. I was trying to be all sensible and emigrate with two but then this guy - Tom’s half brother came along. He is the Dodge Hellcat to Tom’s Ford GT. Too North American perhaps? You get the idea. Currently is still like driving a Hellcat in the snow - too much power behind and control intermittent, but six years old is early days for a Friesian Stallion. But he passages for fun, always has - and is scared of nothing - “he be fierce”.

He is forward and sharp - just how I like my men so yes he will likely get some screen time too - as long as it's me on him at the moment. Not that I am in any way special (very much a professional amateur) but I believe these horses and this breed have their humans. They are smart and intuitive which also means they learn the bad just as quickly as the good. They are often misjudged, underestimated and revered mostly for their looks and nature, rather than their ability. But times change and this breed and the incredible examples from the Netherlands are proving this - winning at all levels of the sport and challenging equine prejudices. So I would say in conclusion for this blog, “underestimate a Friesian, that’ll be fun ….” And if you do, do the decent thing and video the evidence. These guys can buck for Britain

Previous Does your horse need an equine dentist?
Next Meet a Friesian Stallion
Latest From View All Blogs
Related Posts