What a wet summer and September we have had, but this hasn’t stopped us from cracking on practising for the Pony Club dressage regionals and one day event. My new pony Cracker (who arrived in March this year) and I had a bit of a falling out with to start with. My little arms and legs against his thick neck and big bottom didn’t make much impact at first. However, as Mummy says, practice makes perfect.

We learned to understand each other better by doing lots of ground work with him, playing in the field, transition work, lots of lessons, and went out every weekend to different places.

With Cracker and friends from the Brocklesby Hunt Pony Club we took a team of four on the long trip to the regionals in Melton Mowbray — and we only went and won! Cracker and I got 69.52%! Which meant we qualified for the finals at Keysoe this September.

But the practice didn’t stop there as we then had a One Day Event at Rolleston, a beautiful new BE 80 course with lots of bright coloured fences and I found it a really nice ride.

Our dressage did not start well this time, as for once, with all the hype and pressure I put myself under, I forgot my test at the start.  But I put all of this behind me after a little cry. Mummy said not to worry about it and to concentrate on the next two phases.  I was then really surprised to find we’d scored well with 34.7 penalties in the dressage — sometimes Mummys do know best! The team came third overall so that was another championship at Keysoe to attend, fortunately the same weekend as the dressage championship.

Don’t tell Mummy this but I’m actually quite enjoying dressage and learning new things and cracker and I are now in harmony with each other.

At the Keysoe championships, the dressage day was not  a great day one for our team, but my friend and team mate Coby did brilliantly, coming first individually with a mark of over 71%! Cracker and I got 60.48%, my worst score ever with him. But I took it on the chin and let it go over my head! I knew that Sunday was my day — the eventing.

We had to be up early for my 9.20am dressage, and I was nervous and knew that I could have done better, but I focused on the jumping to come. I was last to go in the show jumping and went clear, so spirits were already high in the Brocklesby team as the dressage scores came in —  I had got 31.7penalties! We went out on xc and set off like a bat out of hell..... but pulled it back on course since you can get penalty points in Pony Club eventing for going too fast.

We got clear as a team round the cross country and came back so excited! It was a very long wait until 5pm for the results. There were 33 teams here and over 120 competitors all of whom had qualified at their areas by finishing 1st, second or third in previous months. We sat anxiously for the results to come through.. the team came 4th, and in 4th place individually ROBYN BYRNE AND CRACKERJACK! Mum was crying but I don't know why? 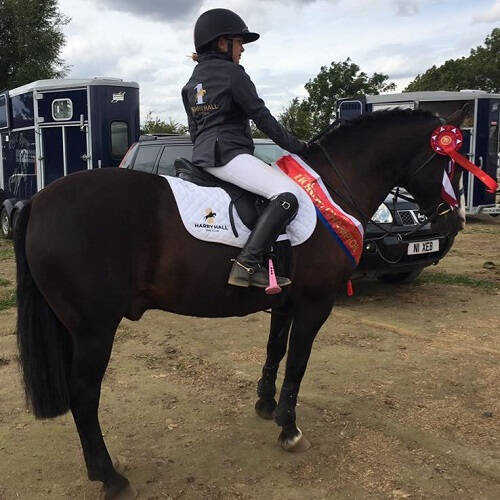 Another favourite event of mine is an unaffiliated show jumping show at Arena UK which you qualify for at local events. I LOVE IT here. Cracker and I won the 80 Grand Prix, he did some cracking turns and really did me proud.  BUT the best bit had to be representing Harry Hall and being invited to help my new best friend and former Olympic show jumper Geoff Billington hand out the the trophies and prizes.

I saw lots of lovely ponies and made some new horsey friends. We got to sit in hospitality in great seats and rode my friend Ivy’s pony in the mounted games.

Ponies at home at last!

Another exciting change this September Mummy and Daddy have bought a house with land and stables so I will be able to look out of my bedroom window and see my beautiful ponies.  I know I am a very lucky girl and this is a dream of Mummy's also.

What I’ve been wearing

This is a hard one as I have had so many things these past few months, however I think this has to be my Harry Hall Harton Junior jods in PINK! They make it a lot easier to wear joddy boots rather than always putting my best Edlington boots on. As you can see from the picture these are well worn!