The World’s Against Me

Apart from it being my birthday and Christmas, November/December is not my time of year. This time last year is when I first started to notice that Suzie wasn’t feeling quite right and now Ruby has gone lame too! With plans failing, shows having to be cancelled and horses going lame left right and centre, I got a comment on my instagram saying “I swear the world is against you at the moment!” and that got me thinking: has anything good happened because of everything going wrong? I’m a big believer in everything happening for a reason and surely this can’t be an exception.

On the 12th of November last year, I set up a lovely course in the outdoor arena and took Suzie out to jump however she just kept stopping! People told me that everyone has bad days but I knew that something wasn’t right. At first I thought that it must be her teeth as she hadn’t had them done in a while so we called the vet who came and found that it wasn’t her teeth at all. Long story short, we found out in late December (after the X-rays) that Suzie has a lump of bone in her shoulder joint which rubs on the tendon that runs through, causing inflammation. So as you’ll know if you have been following me over this past year, we have now retired her and I got a new horse called Ruby in January. 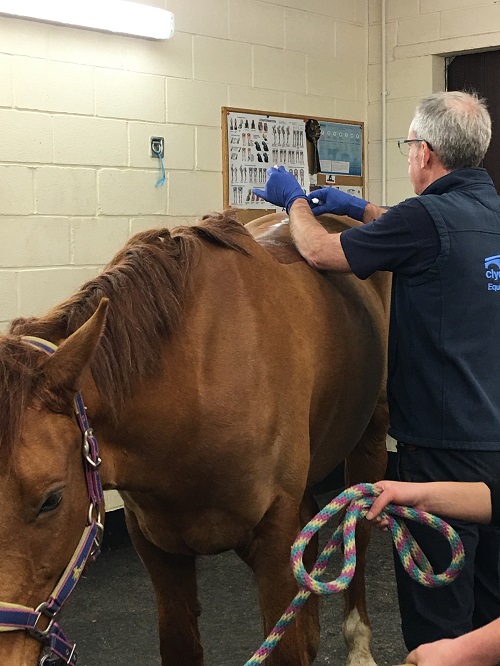 As you can probably imagine, when the winter months came around again and I had another lame horse, it was very frustrating. It seemed like the world was just against me!

Ruby had just been bucking loads and loads and again people just told me “she’s just being naughty” or simply “chestnut mare.” however I once again knew that it wasn’t normal and she’d been tensing and resisting against me which usually means that they’re in pain. We got the vet out and she diagnosed her with sacroiliac problems and referred us to the equine hospital. We went to the hospital and she was X-rayed which uncovered the mild arthritis in both of her stifles as well! She then had injections containing steroids and a special type of acid in her stifles and sacroiliac. She is now on the road to recovery but this still means that I am without a horse for a little while.

A local competition centre holds a (conveniently timed) inter-school showjumping competition at the end of November each year. Of course, as you just found out, I didn’t have a horse to take for either year. But this didn’t stop me! In 2016 I only had a week to find a pony so my friend very kindly lent me her pony Popit who hadn’t done much in a while but is very honest. So within 3 days of riding her we managed to get 2 double clears and a good time in the jump off! Who needs practice?!

This year was a bit more of a struggle. You may think that it would have been easier to find someone to ride as I had a lot more time but that also leaves a lot more time for things to go wrong... So after plan A failed as I couldn’t take Ruby, the obvious answer was to ask if I could ride my friends horse (not Popit) however she doesn’t get along with that venue so I couldn’t ride her; there goes plan B! On to plan C, which was to take my friend’s other horse Ellie which looked like it was going to work for a while until she got a virus. At this point, plan D was going to have to be Suzie! The vet said that Suz can do small amounts of work every now and again and if she is sore then just to give her some bute after but I knew that realistically we wouldn’t get a nice round as she’s sore and unfit. Plan E was Sarge, a horse I have been riding for someone at my yard however he hadn’t been worked in a few months before I started riding him so I just thought that it would be a bit much for him. Then it occurred to me that Popit could be my plan F but again, she’s hasn’t been in regular work since the last interschools so wouldn’t be fit enough. Then finally I found a plan that would work! Almost. Dawn is a 16.2hh dappled grey that belongs to a lovely lady at my yard who very kindly offered to let me take her! I tested her out and got used to her floaty trot then took her to a show at the same place as the interschools the weekend before and she was perfect! I was all set to take her until the night before when I got a text saying that her legs were swollen so she couldn’t jump. This is when the panic to find a plan H began. I phoned one of my team mates (Ellie’s owner) for advice only to find out that Ellie had recovered!  It was a miracle! Only thing was, the only time I’d ever ridden Ellie was on a hack. This didn’t matter though, what mattered was that I had a horse to ride!

At the interschools we had a lovely first round, only knocking a plank (she’s just a baby) then clear in the jump off and our team coming second overall!

All of this may seem very negative and like I’m just complaining however as I said in the beginning, everything happens for a reason and as a result of my ponies going lame I have improved my riding so much! Riding lots of different horses has improved my seat and my confidence so much! I have learnt to just get on and get on with it; not to mess around “getting used to” the the horse. I have actually ridden more often while my two have been off as people keep lending me their horses to ride and it has really improved my adaptability and my seat.

So I’m conclusion, if life gives you bruised bananas, make banana bread! Whatever bad stuff happens to you there’s always a way that it will improve you as a person and a rider (or at least make a funny story later on!)