When a Man Met a Horse

This month’s blog is from man.on.horse, also known as One Club member Stewart Turner. We met Stewart, virtually, about a year ago as his Instagram account stood out for being, shall we say, a little different, not only was he a man riding, but he had pledged to give money to charity for each follower milestone he reached. His profile provides a solid mix of fun content and we are enjoying following his journey of horse ownership. Enjoy the read:

When I was little, I asked my mother “what will I be?”. Will I be handsome? Will I be rich? She was a realist and said no to the above, which is fine (!), what my parents did instead though, and probably more so my Dad, was to instil a great love of animals. Over the years my siblings (six of us) and I would have dogs, cats, ducklings, chickens, a horse (before I was born) and my eldest brother even had a kestrel. And all this was before we moved to a small farm in Wales! That opened the floodgates, and the locals used to say he had a menagerie…

My interest in horses started when I was quite young. One of my sisters, who was into horses, would take me to a riding school, where I had a couple of lessons. Then when we lived in Wales, she used to take me for a couple more lessons and I thought I was amazing on horseback (turns out my memory isn’t that good, but more to come on that). Having that belief in my riding ability did mean I have always been confident getting onto any horse when on holiday, even the livelier ones. I have come to realise; these types of horses are used to all sorts of riding abilities, so my riding skills were never tested.

I have three daughters, and they started showing an interest in riding from an early age. From our experience of taking my eldest to a few lessons, we knew that a) it was going to be expensive to pay for all three having lessons, and b) it would take a very long time for them to get to a decent standard of riding. And more time equals more expense. So, we decided that we should get them a pony. This is when Ralph entered our lives, we needed a pony for all three girls, and this 14.1hh chestnut cob ticked all the boxes.

From my time living in the countryside on a small farm, I love being outside, every morning I would head to the yard before work and do all the jobs so that Ralph was all done for when the girls finished school – I was in my element. I enjoyed spending time at the yard and looking after Ralph so it might not surprise you to hear it wasn’t long before I started looking at horses for myself. I spotted a seven-year-old 17.3hh dapple grey Irish Sports Horse advertised and went to go and see him. This is when Bilbo entered our lives. I took him for a ride up the road when we viewed him, as cars approached from behind, he slowed to walk and then as soon as they’d gone past, he broke back into a trot again. I had no say in the matter as pulling on the reins didn’t slow him down, looking back it was the first reminder that I couldn’t ride. The only problem being that we were rapidly approaching a T junction onto a busy road, my only option was to turn him into a driveway and go back the way we had come. My wife also tried him she had none of these issues – confirming my riding abilities didn’t yet meet my expectations!? 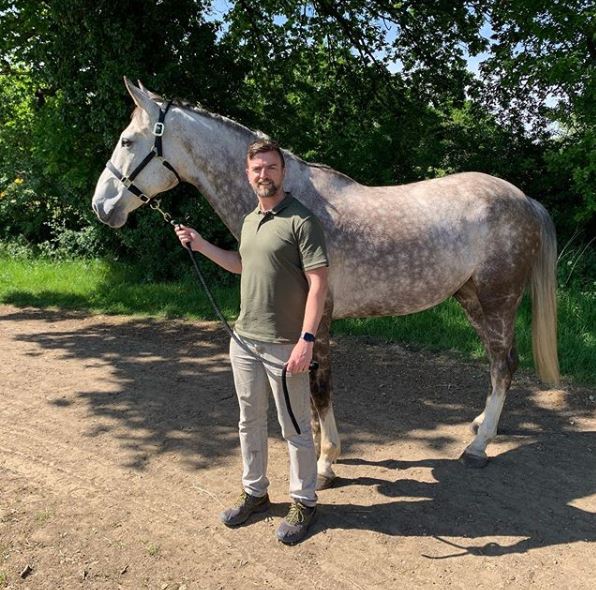 I made it back unscathed and before we left, we said we’d let them know later that day. We didn’t get far down the road before I asked my wife what she thought, and she replied “I think he’s too good an opportunity to miss” so that was it. He was ours but I was all too aware of the work I had to do.

In the first few months of ownership, I learnt I had a huge spooky and somewhat nappy baby on my hands. I experienced bolting from noises in bushes (ending in me being launched into the stratosphere and breaking my rib on landing), freaking out from cars heading towards us on a single lane road (resulting in us cantering down the middle of the road), and moonwalking when not wanting to go past his turnout field. It has been interesting, to say the least, but would I change any of it? No way. I have learnt so much about riding, about horse ownership and myself through Bilbo. We’re slowly getting there with help from a great trainer and a very supportive family.

I could also write about my Instagram account, my plans to get more men riding, attempting to launch my menswear range whilst also raising vital funds for charities but Harry Hall will tell me off for writing too much. And did I mention my new friend in the riding world, Carl Hester? OK, a friend is a strong word, but we are getting there. Will I be handsome? No. Will I be rich? No. Do I care? Not in the slightest. I’ve never been happier.

Signs of Colic in Horses

How to Poultice a Hoof

How to Reduce Poll Tension